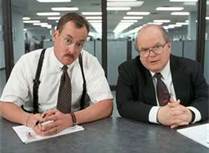 In the current debate of how best to increase revenues it is important to distinguish between marginal taxes and effective taxes.  Marginal taxes are the taxes you pay on an incremental amount of income.  If the marginal tax rate is too high you have an incentive to avoid the increase in income.

The effective tax is the total tax you pay on the total income.  It may be less than the marginal tax because the effective tax, the amount you actually pay, may be reduced by deductions, credits and preferred income streams such as  tax free municipal bond interest or capital gains which carry a lower rate.

Because we do not view transfer payments as a tax, albeit a negative tax, we fail to consider the consequence of this tax.  It becomes as strong a disincentive to earning an extra dollar as a 50% positive tax.

Economist John Cochrane in his blog, The Grumpy Economist, notes this graphically in Taxes and Cliffs, 11/25/12.  This is an important analysis.

Despite the EITC and child credit, the poverty trap is still very much a reality in the U.S. A woman called me out of the blue last week and told me her self-sufficiency counselor had suggested she get in touch with me. She had moved from a $25,000 a year job to a $35,000 a year job, and suddenly she couldn’t make ends meet any more. I told her I didn’t know what I could do for her, but agreed to meet with her. She showed me all her pay stubs etc. She really did come out behind by several hundred dollars a month. She lost free health insurance and instead had to pay $230 a month for her employer-provided health insurance. Her rent associated with her section 8 voucher went up by 30% of the income gain (which is the rule). She lost the ($280 a month) subsidized child care voucher she had for after-school care for her child. She lost around $1600 a year of the EITC. She paid payroll tax on the additional income. Finally, the new job was in Boston, and she lived in a suburb. So now she has $300 a month of additional gas and parking charges. She asked me if she should go back to earning $25,000…..

While we focus on a single rate such as the federal income tax, our incentive to earn is formulated from the accumulation of all taxes and friction costs.  For a new entry into the workplace these friction costs include transportation costs and suitable clothing, baby sitters, and the loss of leisure time.  The total tax burden includes state and local taxes, FICA, Medicare and taxes and addition consumption taxes required for the job.

The high marginal tax rates for those at the lower end of the income scale increases dependency and stifles incentive to work.  It is not the lower rate on the upper income that should outrage Warren Buffet; it is the much higher rate we impose on those trying to leave dependency.

Someone who is trying to climb out of poverty by working their way up can easily reach a point where a $10,000 increase in pay can cost them $15,000 in lost benefits that they no longer qualify for. That amounts to a marginal tax rate of 150 percent– far more than millionaires pay. Some government policies help some people at the expense of other people. But some policies can hurt welfare recipients, the taxpayers and others, all at the same time, even though in different ways.

Why? Because we are too easily impressed by lofty political rhetoric and too little interested in the reality behind the words.