Just Do Whatever You Want 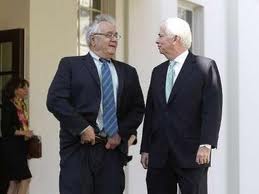 Similarly, the law created a new Consumer Financial Protection Bureau (CFPB) within the Federal Reserve, directing it to ensure “that markets for consumer financial products and services are fair, transparent, and competitive.” The law gives CFPB the power to make rules “as may be necessary or appropriate to enable the Bureau to administer and carry out the purposes and objectives of the Federal consumer financial laws.” If this sounds nebulous, you can take comfort from Dodd-Frank’s provisions for “rulemaking standards,” such as the admonition that the Bureau “shall consider” the “potential benefits and costs to consumers and covered persons,” as well as the “impact of proposed rules on covered persons.”

There’s little danger the new agency will be hamstrung by these exacting requirements, however, since the law also stipulates, “The Bureau, by rule, may conditionally or unconditionally exempt any class of covered persons, service providers, or consumer financial products or services, from any provision of this title, or from any rule issued under this title, as the Bureau determines necessary or appropriate to carry out the purposes and objectives of this title.” It would have saved everybody a lot of time if Dodd-Frank had simply told CFPB to do whatever it wants, however it wants, to whomever it wants. (underline and emphasis are mine)

Not only are the regulations themselves mind numbing, but the laws are now so poorly written that few who support them have any idea of what is being passed because so much is now passed onto to unelected regulatory officials with no accountability to voters. It is often years after the law is passed before the actual regulations they engendered are even known.

Those of us who are to be held accountable have to comply with rules that have not been written often by agencies that have not yet been created.  Only a fool would invest in such a climate.