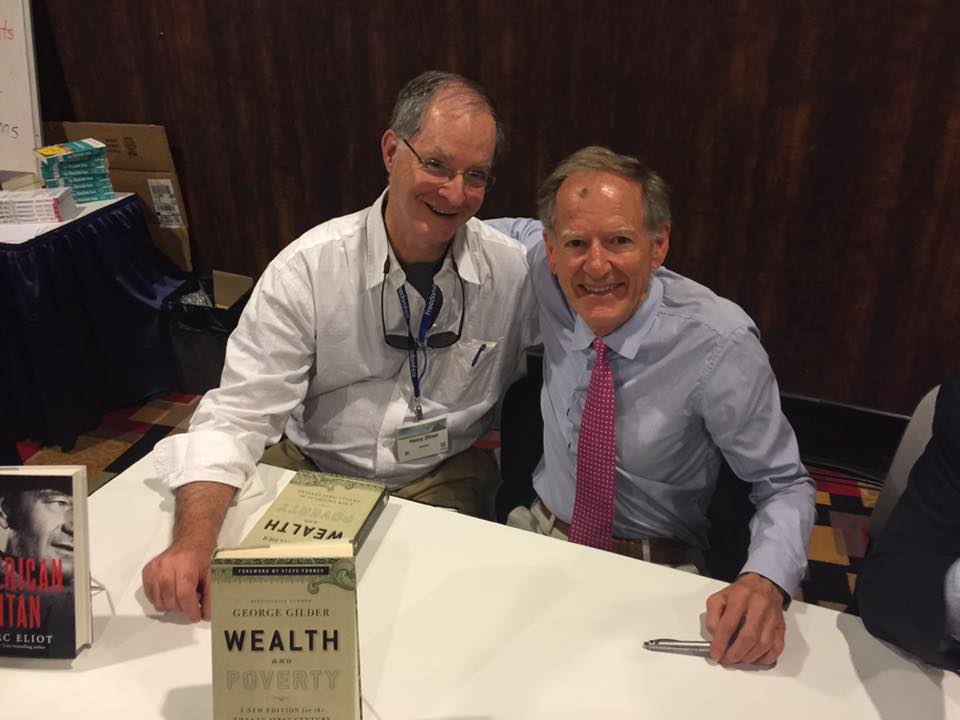 George Gilder after signing my copy of Wealth and Poverty

The big prize at Freedom Fest was George Gilder, most famously noted for his Wealth and Poverty. His new book is The Scandal of Money. Gilder wrote of travelling to China with Milton Friedman and respectfully challenges many of Friedman’s assumptions which have been proven wrong.  Below he shows that his idea that the velocity of money only narrowly fluctuated  has been proven tremendously wrong.

But if velocity is not constant, then consumers and investors and lenders could counteract any given monetary policy merely by changing the rate at which they spend or invest the dollars. In recent decades, this is what we seem to have done, compensating for and neutralizing every change in the money supply with a nearly equal and opposite change in turnover. Indeed, in an interview in 2003, three years before his death, Friedman finally acknowledged, “The use of quantity of money as a target has not been a success. I am not sure that I would as of today push it as hard as I once did.” 10

Velocity is not an effect of psychological forces outside the economy. It is the active means by which economic agents— people— control money. Velocity is freedom. It expresses the public’s appraisal of economic opportunities and opportunity costs. Velocity comes in two forms— pro-growth and anti-growth rises. In anti-growth moves, people flee from financial assets to consumables and collectibles, real estate, and financial shuffles in zero-sum inflationary surges that are not technically measured as velocity but certainly reflect monetary turnover. Positive accelerations of velocity come when investors plunge into actual companies and drive a rapid learning curve of opportunity and progress. In neither case does the central bank control money. We the people control it.

If we control money, then money does not require a sovereign source. Its source can reside outside the political system. It does not need central bank management. Currencies around the world do not have to be separated and allowed to float against one another.