The Idea of Objective Truth 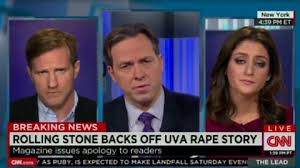 Victor Davis Hanson writes Lying for the Cause in The National Review.  I was considering a piece on the recent accumulation of lies befalling the progressive movement, but there is nothing I could write than could touch Hanson’s piece.

Excerpts: (but do read the whole article)

Three, postmodernism, the bastard child of modernism, attacks the entire idea of objective truth. We supposedly live in a relativist world cloaked by the lie of objective truth. Facts are merely the authoritative narratives of the powerful, who craft them to protect their own privilege. An establishment rigs up “rules of evidence,” and in that way declares its own stories “true” because they serve the larger power purposes of the elite. We should not necessarily be bound by forensic evidence or videos, nor should we check sources or ask the accused their version of the story or check footnotes — or much of anything else other than ascertaining the degree of privilege associated with any particular narrative.

So “truth” is what is deemed socially useful. After the Rolling Stone essay, perhaps frat boys might not be so cavalier about their sexism in the future. The fact that Dan Rather fell for a fake memo is immaterial. If his purpose was to get a regressive like George W. Bush out of the White House, then the means necessary to do that are irrelevant. Maybe Michael Brown did not have his hands up in a gesture of surrender, or then again maybe he did. But who is to rule out that he could have had them up and that the cause of young black males can benefit from assuming that he did?

At the heart of modern progressivism is an “ends justify the means” mentality.  Lies are merely myths to serve a greater purpose.  Facts only have value to the extent that they serve the preferred narrative. Emotionally inciting anecdotes have more value than carefully considered analysis.  Intentions are of far more value than accountability or results.