The Perpetual Crisis of Human Existence 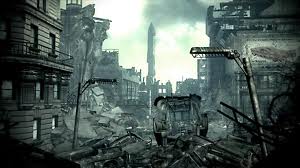 Natural history is a saga not of balance but of convulsive changes, wiping out whole species left and right, transforming continents, evulsing mountains, and flooding vast plains and valleys.  There is no such thing as equilibrium, in ecology any more than in economics.  Any static state is doomed to disaster.  Our supposed current crises of energy and protein pale before the perpetual crisis of human existence itself.

At any time in human history, a rational calculus of our possibilities would lead to a prediction of doom. But over the millennia, the race has flourished.  It has thrived, however, chiefly on one condition, one cluster of conditions, combining faith and freedom with risk and work.  It is chiefly when we give up on chance and providence, when we attempt to calculate and control our own destinies through ever greater regulation by a demiurgic state, that disaster occurs.

At any time in the history of the race , the extended future has usually appeared to be hopelessly grim, uninhabitable by free humans.  All plans based on the calculable present, on the existing statistics, necessarily presume a declining field of choice, a contradiction of possibilities, an exhaustion of resources, a diminishing of returns-entropy and decay.

To combat these exigencies,  the planner will always see a need for regulation of ever more intimate and intrusive kinds, invading the family and the home.  In the end, as reserves expire, the planner becomes a tyrant and a killer- the Mioloch of the closing circle.

From the new edition of Wealth and Poverty by George Gilder.  Originally published in 1980 the new version is updated with 40,000 words and views on the current scene.

Gilder’s assessment is another contribution to understanding the failures of central planning and the inclination for such planning bureaucracies to become oppressive.  This is also the central theme of The Road to Serfdom by Hayek.

Our leaders fall into this trap by finding political value in protecting voters from the short term pain of risks and losses.  They end up circumventing the vital information these failures send that makes for better allocation of capital and further economic growth. By the time many of our problems are generating massively expensive bureaucratic solutions these problems  are already generating their own solutions.  Government interference circumvents a sustainable natural solution with a heavy handed regulation that too often just institutionalizes the problem and creates new ones.

The bureaucrats end up creating crisis to justify their expansion into our lives, rather than seeking real solutions to problems we face. Such is the armed raid on Gibson guitars to be sure they are using the proper and legal wood on their fretboards.  The law abiding and productive are demonized and the irresponsible are subsidized and rationalized.