Liquidity is Not the Problem 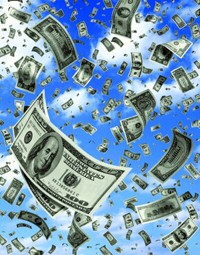 Finally, this analysis also suggests that the Fed is going to find it very difficult to justify another round of quantitative easing. There’s too much inflation and too much uncertainty right now about where it’s headed (did I mentioned the huge increase in the volatility of inflation in the past decade that is evident in the chart?) for the Fed to risk another massive easing effort. The economy is not at all starved for liquidity; there is plenty of money out there.

What is lacking is the willingness of investors and corporations to risk their money in the pursuit of new and productive ventures. There’s not enough confidence in the future, there’s too much concern about increased regulatory and tax burdens, and there’s too much concern about the future value of the dollar. When those concerns subside, new investment and stronger growth should follow.

As repeated here before, we have reached a point where loose monetary policies can no  longer cover for foolish fiscal policies.

Regulatory Competitive Advantage
Out of Ammo