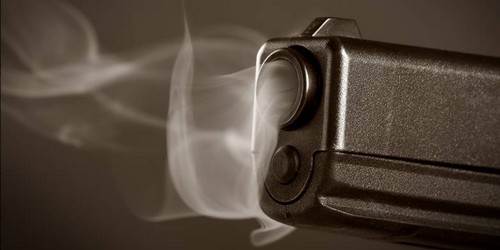 Let us begin with the basics: The United States of America may be a beacon of liberty and prosperity to the world, but it is also a horrifyingly violent society. Firearms are not the live variable in this: We are off the charts when it comes to stabbings, beating people to death, strangulations, homicidal drownings, any kind of murder you can think of. We also have very high rates of deaths from drugs and alcohol, motor-vehicle mishaps, accidents, and the like. The question of why, exactly, that is the case is a matter of intense scholarly interest, and there is, so far, no conclusive answer. But any discussion of homicide in the United States, whether it is of the Chicago street-corner-gangster variety or the lonely-misfit-shoots-up-the-school variety, must begin with the knowledge that we are an unusually violent and unruly people, and have been for a long time. The Swiss keep the prime criminal demographic, young men, armed to the teeth, not with what your friends like to call “military-style” weapons but with actual military weapons, and they have fewer murders in a year than Chicago has on a bad Saturday night. The issue is the character of the people, not the state of gun laws.

But that is not to say that there is not room for improvement when it comes to the intersection of guns, crime, and violence. And that’s where you could, if you were so inclined, proceed in a way that not only wouldn’t antagonize Second Amendment partisans such as myself but would in fact invite our cooperation.

The first thing you should do is have a conference call with your U.S. attorneys and insist that they either start prosecuting straw-buyer cases or start putting their personal possessions into shoeboxes and scooting their lazy asses out the door. We have, at the federal level, robust laws for the prosecution of “straw buyers,” people who have clean criminal records and act as proxies for felons and others unable to legally purchase guns. Straw purchases are not the only or even the main way by which firearms find their way into the hands of those forbidden to possess them, but they aren’t a negligible one, either. Unfortunately, many federal prosecutors (including the one responsible for Chicago) as a matter of openly stated policy refuse to prosecute these cases unless there is a sexier angle to the case, such as a shot at a major trafficking ring or an opportunity for a headline-grabbing organized-crime prosecution.

There is more – read the whole thing.

The Birth and Reaction to Social Engineering
An Incongruous Victory