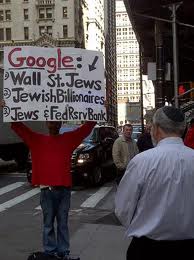 Al Sharpton’s incitement in Crown Heights in 1991 caused a pogrom in New York with several Jews attacked and one, Yankel Rosenbaum, killed. Another was killed who was thought to be Jewish, but was not. After a young black man, Gavin Cato, was accidently hit and killed by a car with a Jewish driver, blacks rioted, one saying,  “Let’s go to Kingston Avenue and get a Jew!”. At the funeral Sharpton referred to the “diamond dealers.”

And of course we remember Jesse Jackson’s reference to New York City as “Hymietown”.

Al Sharpton was rewarded with his own show on MSNBC and Jesse Jackson became an advisor to presidents.

The left has tolerated anti-Semitic speech on campuses for years.  It was excused as a right of free speech and the need for tolerance. The only group not entitled to a safe space were the Jews on campus.

The Occupy Wall Street movement had several instances of blatant anti-Semitism, but it was discounted as the mere rantings of an unrepresentative few.

Alan Dershowitz and Ruth Wisse have both noted that anti-Semitism, often thinly veiled as anti-Zionism, has found a much greater reception on the left than the right.

Yet when a few hundred from the newly labeled Alternate Right display their venom in public it is front page news and the calls for Trump and his minions to be held accountable are repeated ad nauseam. When he does disavow them they still hammer for a stronger statement.

The Trump presidency is the most Jewish in history; his son in law Jared Kushner, an orthodox Jew, was instrumental in his campaign success.  Trump has Jewish grandchildren. This attempt to hold Trump responsible for a handful of anti-Semites who supported him is absurd. Such hypocrisy and contempt from the left drove many to support Trump.

It is the Alternate Left the Jews have more to fear from and their numbers are far greater.  Who will be held accountable for them?

The Democrats Need a New Organizing Principle
Re-Discovering the Constitution