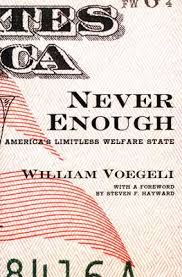 From Never Enough by William Voegeli

“The broader social problem was that the alleviation of poverty, whether from government programs or the advance of capitalism, had liberated people to pursue private goals, which, though not necessarily antisocial, were apt to be asocial in ways liberals did not approve of. Echoing The Affluent Society, The Nation editorialized in 1965, “The affluent tend to be mindless, shut off from reality, lost in a surfeit of silly possessions and sillier pursuits.” Galbraith himself was fond of the adage that we should comfort the afflicted and afflict the comfortable, “especially when they are comfortably, contentedly, even happily wrong.” The implication of that “especially” is that when the comfortable are not smug, or not even wrong, they still deserve to be afflicted just for .”

“In 1957, Arthur Schlesinger tried to solve both these problems, to give liberalism something to be about in a time of prosperity and to give economically secure citizens a reason to welcome its new reforms. He wrote that the New Deal’s establishment of the welfare state and Keynesian management of the economy heralded the completion of the work of “quantitative liberalism.” Its logical and necessary successor should be “qualitative liberalism,” which would “oppose the drift into the homogenized society. It must fight spiritual unemployment as [quantitative liberalism] once fought economic unemployment. It must concern itself with the quality of popular culture and the character of lives to be lived in our abundant society.”

How FDR Deformed Liberalism
SNL on The Democratic Debate