Similarities Between Nazis and Commies 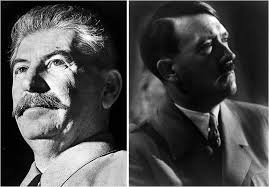 From The Telegraph, Leftists become incandescent when reminded of the socialist roots of Nazism by Daniel Hannan

Marx’s error, Hitler believed, had been to foster class war instead of national unity – to set workers against industrialists instead of conscripting both groups into a corporatist order. His aim, he told his economic adviser, Otto Wagener, was to “convert the German Volk to socialism without simply killing off the old individualists” – by which he meant the bankers and factory owners who could, he thought, serve socialism better by generating revenue for the state. “What Marxism, Leninism and Stalinism failed to accomplish,” he told Wagener, “we shall be in a position to achieve.”

The idea that Nazism is a more extreme form of conservatism has insinuated its way into popular culture. You hear it, not only when spotty students yell “fascist” at Tories, but when pundits talk of revolutionary anti-capitalist parties, such as the BNP and Golden Dawn, as “far Right”.

What is it based on, this connection? Little beyond a jejune sense that Left-wing means compassionate and Right-wing means nasty and fascists are nasty. When written down like that, the notion sounds idiotic, but think of the groups around the world that the BBC, for example, calls “Right-wing”: the Taliban, who want communal ownership of goods; the Iranian revolutionaries, who abolished the monarchy, seized industries and destroyed the middle class; Vladimir Zhirinovsky, who pined for Stalinism. The “Nazis-were-far-Right” shtick is a symptom of the wider notion that “Right-wing” is a synonym for “baddie”.

In fact, authoritarianism was the common feature of socialists of both National and Leninist varieties, who rushed to stick each other in prison camps or before firing squads. Each faction loathed the other as heretical, but both scorned free-market individualists as beyond redemption. Their battle was all the fiercer, as Hayek pointed out in 1944, because it was a battle between brothers.

Authoritarianism – or, to give it a less loaded name, the belief that state compulsion is justified in pursuit of a higher goal, such as scientific progress or greater equality – was traditionally a characteristic of the social democrats as much as of the revolutionaries.

Jonah Goldberg has chronicled the phenomenon at length in his magnum opus, Liberal Fascism. Lots of people take offence at his title, evidently without reading the book since, in the first few pages, Jonah reveals that the phrase is not his own. He is quoting that impeccable progressive H.G. Wells who, in 1932, told the Young Liberals that they must become “liberal fascists” and “enlightened Nazis”.

In those days, most prominent Leftists intellectuals, including Wells, Jack London, Havelock Ellis and the Webbs, tended to favour eugenics, convinced that only religious hang-ups were holding back the development of a healthier species. The unapologetic way in which they spelt out the consequences have, like Hitler’s actual words, been largely edited from our discourse. Here, for example, is George Bernard Shaw in 1933:

Extermination must be put on a scientific basis if it is ever to be carried out humanely and apologetically as well as thoroughly… If we desire a certain type of civilization and culture we must exterminate the sort of people who do not fit into it.

Eugenics, of course, topples easily into racism. Engels himself wrote of the “racial trash” – the groups who would necessarily be supplanted as scientific socialism came into its own. Season this outlook with a sprinkling of anti-capitalism and you often got Leftist anti-Semitism – something else we have edited from our memory, but which once went without saying. “How, as a socialist, can you not be an anti-Semite?” Hitler had asked his party members in 1920.

Eisenhower- A Better GOP Role Model
A Program for Every Problem