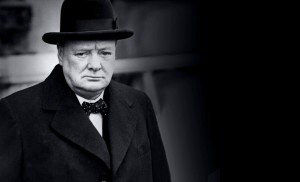 From National Review, Lion to the Last by Larry Arnn:

In June 1945, a month after the Germans’ surrender, with the general-election campaign under way, Winston Churchill gave a 21-minute speech by radio. He was 70 years old. To the shock of much of Britain, it included this:

I declare to you, from the bottom of my heart, that no Socialist system can be established without a political police…No Socialist Government conducting the entire life and industry of the country could afford to allow free, sharp, or violently-worded expressions of public discontent. They would have to fall back on some form of Gestapo, no doubt very humanely directed in the first instance.

Asserting in 1945 that the socialists would become like the Nazis was met with outrage, and even Churchill’s allies and members of his family heavily criticized the speech, which was dubbed his “crazy broadcast.” A month later, Churchill’s Conservatives were not just beaten in the election, they were overwhelmed — by a Labour party that gained the largest majority in the history of modern British politics to that time.

Churchill came to the same conclusion as Frederick Hayek in his Road to Serfdom.  While this inevitable outcome of central planning seemed logical after the wreckage in Europe in WWII, it may be the weakest prediction.  While so much of the Road to Serfdom is accurate the inevitability of tyranny may be wanting.  There may have been other factors that led to this outcome in Germany that would not hold true in societies that had different cultures and political constraints.  Even though the progressive movement in the United States was often a direct assault on the constitution and individual and natural rights, the latter remained intact enough to block many of the extremes that both Churchill and Hayek feared,

Getting the Causality Backwards
Reading 2015 02 25