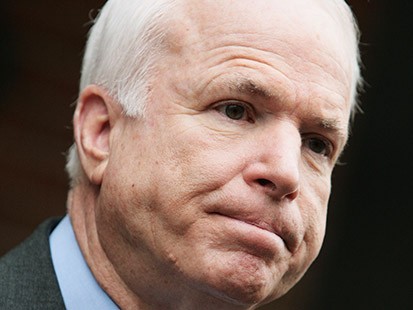 McCain apparently has forgotten that, two years after he snatched defeat from the jaws of victory when his “next in line” establishment candidacy sputtered into oblivion (like the candidacies of Bob Dole before and Mitt Romney after), it was the Tea Party, a movement of people outraged by a Godzilla-sized government that was regulating and taxing away their freedoms and forcing ObamaCare down their throats, that gave the GOP House control and made John Boehner speaker.

In 2004, McCain, who had voted against the 2001 and 2003 Bush tax cuts, and who said on NBC’s “Meet The Press” that he was against extending them, also said, “My party has gone astray” and “The Democratic Party is a fine party, and I have no problems with it, in their views and their philosophy.”

Is it no wonder he ran such a milquetoast campaign in 2008 and lost? President Obama won re-election in 2012 by playing to his base. If the GOP hopes to win in 2016, it would be advised not to make war on its base as McCain is doing but, as the saying goes, dance with those who brought it to victory in 2010 and re-invigorated a party that seized the Senate in 2014.

The Piper of Modern Conservatism
Selling Half Truths