A Portion of Keynes 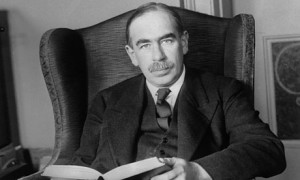 I have often wondered if Keynes would recognize the policies that are often carried out in his name.  Art Laffer and Kenneth Peterson addressed this question in The Investor’s Business Daily  in Obama Tax Hikes, Aimless Spending Ignore Keynes:

The higher taxes, heavy regulation, aimless government spending and huge ideological pet projects undertaken by this administration during the depth of a recession were all peddled to the American public as textbook Keynesian economic stimulus.

All, however, predictably nurtured atrophy, and seldom in the history of economic policymaking has so much harm been done to so many by so few. Words written in Keynes’ own hand, moreover, imply he would have rejected such blunders.

On Dec. 16, 1933, Keynes sent Franklin Roosevelt a letter outlining the content of his forthcoming op-ed in the New York Times. If FDR wanted prosperity to return to America’s shores, Keynes warned, the president must cease harming the supply side of the economy.

Government stimulus spending must be wisely chosen, he counseled. “There are many obstacles to be patiently overcome, if waste, inefficiency and corruption are to be avoided. There are many factors which I need not stop to enumerate, which render especially difficult in the United States the rapid improvisation of a vast programme of public works.”

Taxes must not be hiked, Keynes also stressed. “I lay overwhelming emphasis on the increase of national purchasing power resulted from governmental expenditure which is financed by Loans and not by taxing present incomes.”

And reform and recovery policies, he added, must be employed separately, not simultaneously: “On the other hand, even wise and necessary Reform may, in some respects, impede and complicate Recovery. For it will upset the confidence of the business world and weaken their existing motives to action . . .”

Keynes stressed in his letter to Roosevelt that not all government spending is created equal and that the president should get “behind a campaign for accelerating capital expenditures, as wisely chosen as the pressure of circumstances permits.”

To finance the landscaping commenced in the name of economic recovery, Obama raised the top marginal tax rate on personal income to 39.6% from 35% and the tax rate on capital gains and dividend income to 23.8% from 15%.

The president resolved to put ideology ahead of science and cold-shouldered findings published by Romer, then chair of his Council of Economic Advisers. In her magnum opus on tax policy, she concluded that higher taxes would be deleterious to economic growth and recovery. Unsurprisingly, economic growth stalled.

President Hoover tried a similar recovery policy in 1932, when he hiked the top marginal tax rate on personal income to 63% from 25% but succeeded only in drilling the already-feeble economy into the ground.

Lord Keynes was a fervent proponent of fighting recessions with carefully planned government spending. Yet he was adamant that taxes must not be raised to finance government “stimulus” spending.

In Keynes’ view, mixing recovery policies and vast ideological pet projects was poisonous to economic recovery, and he did not mince words when schooling President Roosevelt on this point:

“We wonder whether the order of different urgencies is rightly understood, whether there is confusion of aim, and whether some of the advice you get is not crack-brained and queer.

“On the other hand, even wise and necessary Reform may, in some respects, impede and complicate Recovery. For it will upset the confidence of the business world and weaken their existing motives to action . . . And it will confuse the thought and aim of yourself and your administration by giving you too much to think about all at once.”

In 1946, shortly before his death, Keynes voiced concern about what some of his disciples were making of his theories, revealing his trepidations to his friend and intellectual nemesis, Friedrich von Hayek. In 1952, Hayek recalled their last conversation, in which he asked Keynes if he was alarmed by the policies being promoted by some of his followers. Quoting Hayek:

“After a not very complimentary remark about the persons concerned, he proceeded to reassure me by explaining that those ideas had been badly needed at the time he had launched them. He continued by indicating that I need not be alarmed; if they should ever become dangerous I could rely on him again quickly to swing around public opinion — and he indicated by a quick movement of his hand how rapidly that would be done.”

I have excerpted a much larger portion of this article than I usually do but this is a significant piece of economic history and I am grateful for Peterson and Laffer for sharing it. Please link and read the entire article.

A theorist can not always be held responsible for the use of his work by others.  Just as a part of the truth can be more misleading than all of a lie, using only part of theory can be more destructive than executing the opposite of its prescription.

A Low Information President
Self Interest vs Selfishness