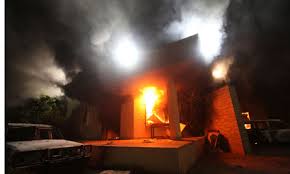 From The American Interest, The Case for More Congress In American Foreign Policy, by Walter Russell Mead:

At the same time, with our Libyan policy, like the country itself, in ruins, one has the sense that the Benghazi investigation missed the larger point. The United States participated in the overthrow of the Qaddafi government, largely on humanitarian grounds, but we were utterly unprepared for the aftermath. Libya is in chaos today, radical jihadi groups have proliferated in the ruins, Qaddafi’s arms and fighters have fanned out across North Africa and the Middle East, and arguably more Libyans have died as the result of the intervention than would have perished had we stayed home. On top of this, there are credible allegations that the U.S. had guaranteed Qaddafi’s safety when he gave up his WMD program. Did our intervention in Libya break a pledge, or did it reduce our ability to persuade other countries to abstain from WMD programs? Did the decision to intervene in Libya also mean that the U.S. was less ready and able to respond appropriately to the much greater humanitarian and strategic crisis that holds Syria in its grip?

Benghazi was one consequence of a much larger and more serious policy failure, and the costs of that failure are still mounting up. By focusing narrowly on Benghazi, Congress missed the bigger question and the more consequential failure. Again, the question is less one of partisan politics than of the national interest: what can we learn from policies that go awry so that in future we can make better choices?

A review of our policy failure in Libya (or earlier ones in Iraq and elsewhere) isn’t just about second guessing and assigning blame. It is about making sure that the nation’s foreign policy infrastructure is up to the tasks that our turbulent century has set for us.