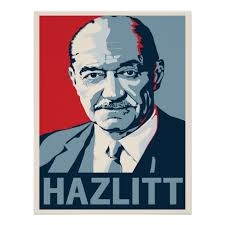 “ECONOMICS IS HAUNTED by more fallacies than any other study known to man. This is no accident. The inherent difficulties of the subject would be great enough in any case, but they are multiplied a thousandfold by a factor that is insignificant in, say, physics, mathematics or medicine—the special pleading of selfish interests. While every group has certain economic interests identical with those of all groups, every group has also, as we shall see, interests antagonistic to those of all other groups. While certain public policies would in the long run benefit everybody, other policies would benefit one group only at the expense of all other groups. The group that would benefit by such policies, having such a direct interest in them, will argue for them plausibly and persistently. It will hire the best buyable minds to devote their whole time to presenting its case. And it will finally either convince the general public that its case is sound, or so befuddle it that clear thinking on the subject becomes next to impossible.

In addition to these endless pleadings of self-interest, there is a second main factor that spawns new economic fallacies every day. This is the persistent tendency of men to see only the immediate effects of a given policy, or its effects only on a special group, and to neglect to inquire what the long-run effects of that policy will be not only on that special group but on all groups. It is the fallacy of overlooking secondary consequences.”

“The distinction may seem obvious. The precaution of looking for all the consequences of a given policy to everyone may seem elementary. Doesn’t everybody know, in his personal life, that there are all sorts of indulgences delightful at the moment but disastrous in the end? Doesn’t every little boy know that if he eats enough candy he will get sick? Doesn’t the fellow who gets drunk know that he will wake up next morning with a ghastly stomach and a horrible head? Doesn’t the dipsomaniac know that he is ruining his liver and shortening his life? Doesn’t the Don Juan know that he is letting himself in for every sort of risk, from blackmail to disease? Finally, to bring it to the economic though still personal realm, do not the idler and the spendthrift know, even in the midst of their glorious fling, that they are heading for a future of debt and poverty?”

“Yet when we enter the field of public economics, these elementary truths are ignored. There are men regarded today as brilliant economists, who deprecate saving and recommend squandering on a national scale as the way of economic salvation; and when anyone points to what the consequences of these policies will be in the long run, they reply flippantly, as might the prodigal son of a warning father: “In the long run we are all dead.” And such shallow wisecracks pass as devastating epigrams and the ripest wisdom.”

Check out this book on the iBooks Store: https://itun.es/us/-Mw_y.l