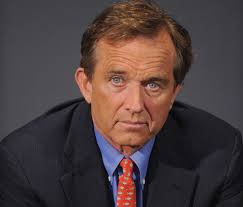 Those who contend that global warming “does not exist,” Kennedy claimed, are guilty of “a criminal offense — and they ought to be serving time for it.”

Kennedy’s insidious aspirations are the inevitable consequence of his conviction that he is in possession of the truth and that all who have the temerity to question him are, in consequence, wreckers. At the best of times, and on the least shaky of epistemological ground, this is a dangerous instinct. In this area in particular, it is downright frightening. Of late, it has become drearily standard to hear theKennedys of the world pretend that if one acknowledges basic climate mechanics, one is forced to take notoriously unreliable computer models at face value and, further, to acquiesce in whatever political “solutions” are currently en vogue. Nothing could be further from the truth. Whatever “consensus” can be said to exist in the realm of climatology is largely limited to the presumption that industrial activity is bound by the same chemical, biological, and physical rules as is any other human pursuit, and to the acknowledgement that if one changes the makeup of the atmosphere, the atmosphere will change. Quite how it will change, to what extent, and to what degree any such transmutation represents a problem for life on earth, however, remain open questions. At present, there remain serious disagreements as to what has caused the current “pause” in global warming; as to what accounts for the embarrassing failure of so many of the forecasts on which we are expected to rely; as to how much of an effect modulations in the climate are having on extreme weather events; and as to how much we can possibly know about the future anyhow.

When the likes of Robert Kennedy reveal themselves to be the nasty little tyrants that we have always suspected them to be, this lattermost question comes screaming back into focus. If this affair has revealed any “treason” at all, the guilty party is not the skeptical population of the United States, but Robert Kennedy and his enablers. To fantasize about jailing one’s opponents is, I’m afraid, a sure sign of mental imbalance, and a gold-leafed invitation to be quietly excluded from polite society. Goodbye, Robert.

Scientific knowledge, by its nature, cannot ever be said to be so “settled” as to justify the silencing of critics. Still, even were the debate over climate change in some way to be resolved in perpetuity, the prospect of incarcerating those who dissented would be no less grotesque. In the small part of Planet Earth in which man can be said to be free, governments exist to secure the liberty of those that employ them, not to serve as arbiters of truth. When Robert Kennedy contends that there ought to be “a law” with which the state “could punish” nonconformists, he is in effect inviting Washington, D.C., to establish itself as an oracle, to ensconce in aspic a set of approved facts, and to cast those who refuse to accede as heretics who must be hunted down and burned in the interest of the greater good. In other words, he is advising that we dismantle that most precious of all liberties: the right to our own conscience. As the blood-spattered history of the human race shows us in appalling and graphic detail, the wise response to the man who insists that the Holocaust did not happen, or that 2 + 2 = 5, or that the United States is geographically smaller than Sweden is to gently correct him — and, if one must, to mock or ignore or berate him, too. It is never — under any circumstances — to push him through the criminal-justice system. The cry “but this is different” remains in the case of climate change precisely what it has always been: the cry of the ambitious and the despotic. Once the principle of free speech is subordinated to expedience, circumstances can always be found to justify its suppression.

And yet the importance of keeping Kennedy’s view at the fringes goes much, much deeper, relating as it does to core questions about liberty, scientific inquiry, and the manner in which the two feed and support one another. There are fair arguments to be had about surface temperatures, chlorofluorocarbons, and the troposphere, but not a single one of them can be productively indulged if the price of the game is the destruction of its less popular players.

“The urge to save mankind is often a cover for the urge to rule it.”

The less tolerant of dissent, the more likely the theory is wrong.

Raising the Price of Exit
Piketty’s Absence of Historical Context