No Substitute for Victory 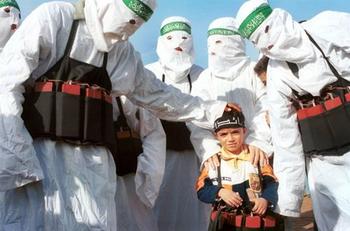 Israel is expected to accept a million cease-fires, no matter how worthless, because a cease-fire is an innately good thing, regardless of whether it’s actually good for anything. If war is always bad, then cease-fires are always good. It doesn’t matter if winning a war actually leads to peace while cease-fires just lead to more war.
The devolution of peacenik idealism from a lasting peace to a cease-fire that lasts as long as it takes a bunch of men from Beit Hanoun to lug their rocket from the mosque to a UNRWA school is an adaptation to a new reality.

We didn’t respond to Pearl Harbor with an unconditional cease-fire. We didn’t address 9/11 with a cease-fire. As miserably defeatist as this administration has been, it still hasn’t declared a cease-fire with Al Qaeda no matter how many civilians, including children, die in the process.

A cease-fire is even more pointless than a peace process. At least a peace process has a goal. A cease-fire is a temporary interruption in hostilities. It doesn’t accomplish anything except to prolong and delay the inevitable. It’s not an end to war. It’s a war that drags on interminably without any final conclusion. Instead the rockets keep falling year after year in the war that never ends.

The first step to winning a war is identifying the enemy. In Gaza the enemy is clear.  Anything other than destruction of this medieval illiberal terror state is inhumane to both its enemies and its citizens.  Pretending we can make war more humane by minimizing its duration rather than defeating its evil source is delusional.  When an evil is this clear there is no substitute for victory.

The Illusion of Wealth
The Racist War on Drugs