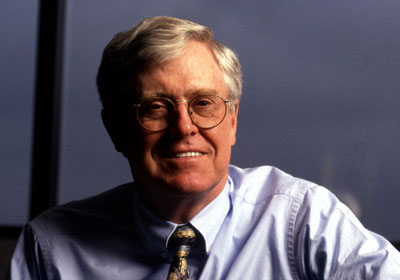 I think one of the biggest problems we have in the country is this rampant cronyism where all these large companies are into smash-and-grab, short-term profits, (saying) how do I get a regulation, we don’t want to export natural gas because of my raw materials … well, you say you believe in free markets, but by your actions you obviously don’t. You believe in cronyism. And that’s true even at the local level. I mean, how does somebody get started if you have to pay $100,000 or $300,000 to get a medallion to drive a taxi cab? You have to go to school for two years to be a hairdresser. You name it, in every industry we have this. The successful companies try to keep the new entrants down. Now that’s great for a company like ours. We make more money that way because we have less competition and less innovation. But for the country as a whole, it’s horrible.

And for disadvantaged people trying to get started, it’s unconscionable in my view. I think it’s in our long-term interest, in every American’s long-term interest, to fight against this cronyism. As you all have heard me say, the role of business is to create products that make people’s lives better while using less resources to do it and making more resources available to satisfy other needs. When a company is not being guided by the products they make and what the customers need, but by how they can manipulate the system — get regulations on their competitors, or mandates on using their products, or eliminating foreign competition — it just lowers the overall standard of living and hurts the disadvantaged the most. We end up with a two-tier system. Those that have, have welfare for the rich. The poor, OK, you have welfare, but you’ve condemned them to a lifetime of dependency and hopelessness. Yeah, we want hope and change, but we want people to have the hope that they can advance on their own merits, rather than the hope that somebody gives them something. That’s better than starving to death, but that, I think, is going to wreck the country. Is it in our business interest? I think it’s in all our long-term interests. It’s not in our short-term interest. And it’s about making money honorably. People should only profit to the extent they make other people’s lives better. You should profit because you created a better restaurant and people enjoyed going to it. You didn’t force them to go, you don’t have a mandate that you have to go to my restaurant on Tuesdays and Wednesdays or you go to prison. I mean, come on. You feel good about that?

The increase in cronyism correlates strongly to an increase in the size and scope of government.  The more areas of our commerce and our lives the government seeks to exercise control the more that business have to game the system to survive.

Neither party pays more than lip service to cronyism but this issue will have great attraction to many voters. This disturbs the true sense of fairness- equality before the law, not fairness as the right to the fruits of someone else’s labor and sacrifice.

This is why the case for shrinking government is not just rational and effective but moral.

Targets on Our Backs
Signs of Social Demise