An Unlikely Stimulus of Efficiency 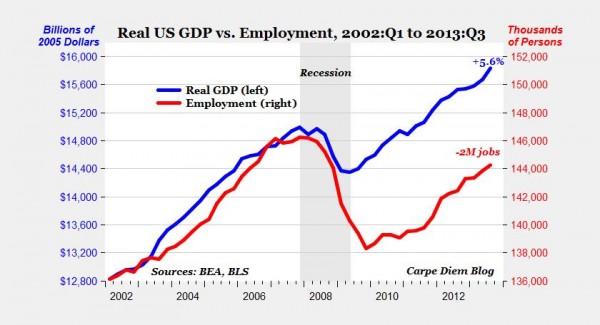 from Mark Perry at his blog Carpe Diem, The current state of the US economy explained in one chart:

The fact that the US economy is producing 5.6% more output now than in 2007 with 2 million fewer workers would explain why corporate profits are at record levels and more than 40% above the pre-recession peak (not adjusted for inflation).

The jobless recovery is the result of at least three factors:

We have a challenge to hire people who are not trained for today’s economy. Growth comes in spurts, but I believe that this economy is coiled ready to grow and hire the long term unemployed when the barriers are removed. This administration has a lot of policies to help the very poor and the very rich, but the middle class and the entrepreneurial class- which is the largest source of new jobs- has been sacrificed with the heaviest burdens of this administration’s polices.

The very wealthy have access to capital that the working wealthy do not.  When you float stock to finance a business you do not have to return the money or pay interest. Smaller businesses have a much harder time borrowing money, if they have the financial history to justify a line and very few do.  The crash of the housing market also destroyed the most common collateral small businessmen had.  This revealing chart is one sign of the gap between Wall Street and Main Street.

Many fellow employers lament that it is much harder to hire good workers now than when the unemployment rate was much lower.  This and the higher costs of workers as a result of government policy has driven many large employers to a much higher level of efficiency.  This was not likely the goal of these policies.