The Risk of Stability 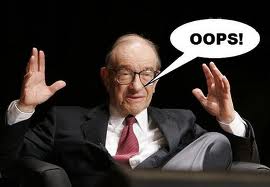 From the Washington Post, Robert Samuelson writes The Greenspan Paradox.

But there was an unrecognized downside: With a less-risky economy, people — homeowners, bankers, investment managers — concluded they could do things once considered more risky. Consumers could borrow more because economic stability enhanced their ability to repay. “Subprime” home mortgages granted to weaker borrowers became safer because housing prices would constantly rise. Banks and investment banks could assume more debt because financial markets were calmer. Hence, the Greenspan Paradox: The belief in less risk created more risk.

The rest is history.

Greenspan’s critics have another story.“Deregulation,” championed by Greenspan, is their villain. Competent oversight could have curbed dangerous excesses. The reality is murkier. Many of the institutions that came to grief — banks, investment banks — were regulated. But regulators shared the optimistic consensus concerning the economy’s transformation. Complacency made regulation permissive.

It was the Great Moderation that gave us the financial crisis and Great Recession. That’s the central lesson here, and it’s both disturbing and largely unexamined. Almost everyone wants prosperity. The holy grail of “macroeconomics” (the study of the overall economy) is to minimize or eliminate business cycles. But too much prosperity for too long breeds the conditions that lead not to routine recessions but to crashes. In his book, Greenspan briefly alludes to this: “Protracted economic stability is precisely the tinder that ignites bubbles.”

… or perhaps even a very competent economist is incapable of comprehending the intricacies of a complex economic system and the consequences of the best intended and most thoughtful policies.

The Limitations of The State
Detaching Technocracy from Competence