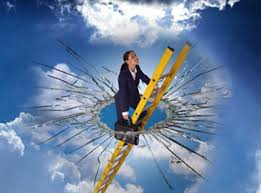 Daniel Greenfield writes in his excellent blog Sultan Knish, Inequality for All, 3/31/13.

Bigotry is too prized a resource to just watch it drain away in some communal pool of brotherhood and sisterhood. The only thing to do is to find ways to dam it up and create national parks of bigotry that will allow future generations of civil rights warriors to rough it by camping out under the burning crosses while admiring themselves for their artificial courage in defense of a manufactured cause.

So instead of equality, there’s diversity that opens up a door for a select few while closing the door for everyone else. Instead of merit hiring, there’s quota hiring. That means one black guy in the boardroom, one Asian woman at the meeting and one Latino guy in the White House. (And the GOP, knowing the stats, and having missed out on the black guy, wants it to be their guy.) And that’s all you get.

The quota can be increased. There can be two of each in the boardroom. Or four of each. The numbers don’t really matter. What matters is that there’s a quota. Instead of bringing in people because they can do the job; they are brought in as representatives of their race, sex and creed.

Affirmative action doesn’t combat the glass ceiling. It is the glass ceiling. Once the quota has been met, it’s been met.  The great goddess of diversity on her pedestal of Made-in-China plastic has been appeased with an offering of a multiracial photo that represents the fabric of diversity. Next year there will be another offering, but that’s it for now. And it’s all white guys from here on in.

The white guys will talk about diversity and the importance of bringing in new voices and points of view. They’ll even hire someone to help them fill the quotas, whose primary purpose is to keep other white guy competitors out of the boardroom. But when the quotas are full, then they are full.

Diversity creates a wonderful snafu in which there can be a black guy in the White House and double digit unemployment for other black guys. Sorry guys, the quota has been filled. There can only be one Obama. Everyone else is out of luck.

Once an institution or bureaucracy is formed to combat a social problem then the actual solution becomes a threat to that institution.  The employees and six figured directors will complete custom designed performance reviews that always show competence and accomplishment  and the problem will be constantly redefined to never go away.  There are just too many salaries and positions to protect.

Having grown up in the South in the 1960’s the progress in racial equality is stunning. No more Bull Connor’s police dogs, firehoses, Klansmen’s lynchings, separate lunch counters and bath rooms.  Yet racism is still presented as the social problem of our time.  Women make up the majority of college graduates and about half of the doctors, lawyers, and accountants.  The problems have not gone away, but they have greatly diminished and sometimes gone hiding in symbolic politically correct speech where we only use the first letter of unacceptable words.

The newest generation of women and minorities are victims of the success of the civil rights and feminist movements.  They do not have the restraints that their parents found hard to remove.  Their parents on the other hand seem to have a hard time accepting success. They have defined their life by the struggle that no longer exists.  If racism and sexism is no longer the problem then we must examine other causes of our problems, and those answers may be far less comfortable.

For others the remaining cries of prejudice and bigotry simply become useful political fodder and a means to stifle debate.