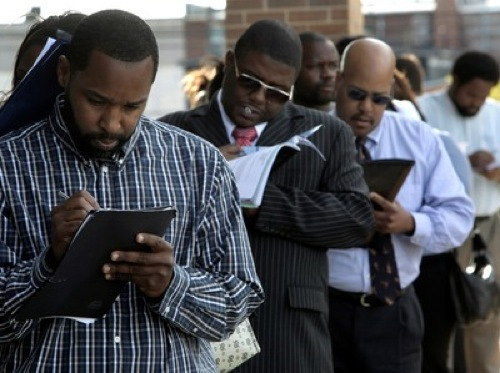 And if there are two applicants who otherwise seem to have equal qualifications for a certain job, but one has been out of work for more than 12 months, it’s only logical that the employer will think that a lengthy stint of sitting on a couch does not suggest great habits.

Which is why Obama’s policy of never-ending unemployment benefits is so misguided. People get lured into long-term unemployment and there is both anecdotal evidence (check out these stories from Michigan and Ohio) and empirical evidence (here, here, and here) showing this unfortunate impact.

First the Federal Government creates unstable monetary policies which leads us into a recession. Then the “we can solve every problem” government passes endless laws and regulations that discourages business growth and new hiring, and then extends unemployment so generously that pressure to get a job is reduced and now they want to sue a business for not hiring the long term unemployed. Is it any wonder that new business start-ups are at an all time low?

You can criticize businesses and force them to give priority to ex cons and long term unemployed and you can threaten them with criminal charges if they do not see the world through the same elitist academic spectacles you wear.  But Dan Mitchell is right, it will only make the problem worse.

There is also the perversity that we will give incentives to hire anyone except those try hardest to stay employed and obey the rules.

If a slow growth economy, more regulations and higher taxes don’t slow down business growth, then finding a reason to make the business owners into criminals should certainly help