Fraud in the Name of Liberalism 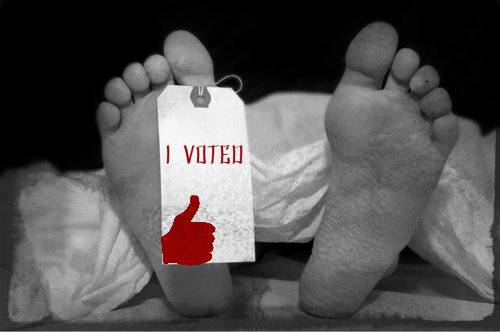 Thomas Fleming writes in the Wall Street Journal, A Jersey Lesson in Voter Fraud, My grandmother died there in 1940. She voted Democratic for the next 10 years.

I have to laugh when I hear current-day Democrats not only lobbying against voter-identification laws but campaigning to make voting even easier than it already is. More laughable is the idea of dressing up the matter as a civil-rights issue.

My youthful outlook on life—that anything goes against the rotten stinking WASP Protestant Republicans—evaporated while I served in the U.S. Navy in World War II. In that conflict, millions of people like me acquired a new understanding of what it meant to be an AmericanLater I became a historian of this nation’s early years—and I can assure President Obama that no founding father would tolerate the idea of unidentified voters. These men understood the possibility and the reality of political corruption. They knew it might erupt at any time within a city or state.

The president’s party—which is still my party—has inspired countless Americans by looking out for the less fortunate. No doubt that instinct motivated Mr. Obama in his years as a community organizer in Chicago. Such caring can still be a force, but that force, and the Democratic Party, will be constantly soiled and corrupted if the right and the privilege to vote becomes an easily manipulated joke.

Behavior is today tolerated in the name of liberalism that would horrify a true liberal.

What A Real Stock Rally Looks Like
Bad Luck