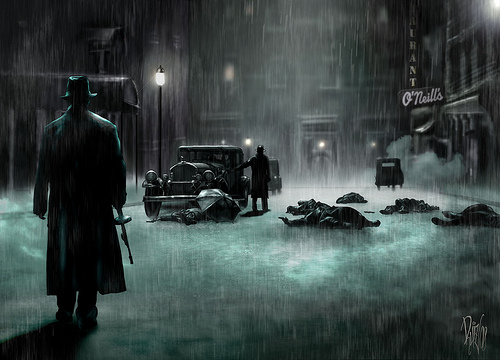 Daniel Greenfield writes The Guns of Obamerica in his blog The Sultan Knish, 1/20/2013.

Reformers in the twenties blamed the plight of the slums on the availability of liquor. They rammed through Prohibition for the entire country to fix the cities. The liquor went on flowing and the slums went on being slums. Gun control has been just as successful in healing the slums as whiskey control was. And like the dry reformers, gun control advocates insist on trying to apply their solution on a national level, when the problem is not nationwide.

Not all of Obamerica is broken, but a lot of it is. Obamerica has a big gap between the rich and the poor. Its middle class is always on the run. Its upper class retreats to fortresses. Its lower class is broken and constantly growing as its political machines feed off human misery and exploit social dysfunction to gain votes.

Most of all this country needs to have a conversation about the direction it’s headed in. We need to set aside the same old tired social justice rhetoric that has done nothing except train .001 percent of the young men and women of Obamerica to be community organizers and race card wielders and have a serious conversation about what is wrong with New Orleans, Detroit and Chicago.

Two excellent points. Liquor, drugs or gun control avoids the real problem; social dysfunction enabled by well intended but misguided public policy.  Secondly such problems may be localized but in the nature of sensationalized media seem national.  It is not those who cling to their guns and bibles that cause the social problems; it is those who are protected and insulated from the consequences of their own decisions.