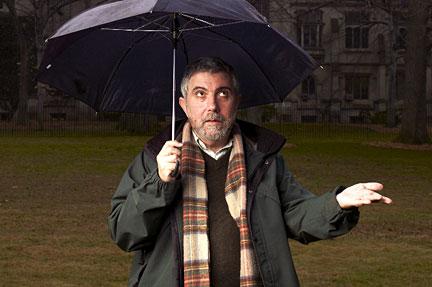 In the article Krugman suggests we return to the tax rates of the 1950 when the highest bracket was 91% and when unions were strong.  This period was one of strong economic growth and thus proves that high marginal taxes and strong unions do not only coexist with growth but are in fact a cause.  This thought was the center piece for his book, Conscience of a Liberal.

The fifties were a unique decade and it is reckless to focus on that ten year period and ignore the collapse that ensued in the 1960’s and 1970’s. It also ignores the collapse of nearly every union laden industry in the following decades.

The high tax rates were passed during the Great Depression and is one reason that the Depression lasted longer than any other previous market correction.  We got a reprieve from the stimulus of producing military goods to fight WW II.  After WW II we had a further stimulus as a result of pent up demand for consumer goods from both wartime allocation and the depression that preceded it, and from the returning soldiers who re-entered the labor force and built families. The growth in population increased demand and total productivity.

Our industries were also able to sell all it could produce at high prices because the productive capacity of the rest of the world had been destroyed in the war.  As Japan and Europe recovered we discovered that our steel and our cars had to compete with countries that had rebuilt with modern plants and motivated workers.

And the higher tax rates of the 1950’s should not be confused with the effective tax rate, the actual taxes paid after deductions.  While the highest tax rates dropped to the low rates of Ronald Reagan, he also removed deductions such as consumer interest.  The effective tax rates dropped but much less than the marginal tax rates.  And in each case of a drop in the marginal tax rates the tax revenues increased and the income tax became more progressive. This point was well made by Mickey Kaus at the Daily Caller here.

The first wave of tax cuts did not come from the Republicans but from John Kennedy himself.  Mark Perry in his blog Carpe Diem noted in President Kennedy responds to Paul Krugman:

Kennedy’s supply-side tax cuts were enacted in 1964 after he was assassinated, and by 1965 the top personal income tax rate was cut to 70% and corporate income tax rates were also reduced. The Kennedy tax cuts did help expand the economy, resulting in a 106-month economic expansion during the 1960s, which was the longest expansion in U.S. history at that time. Individual income tax revenues grew by 85% from 1965 to 1970 and corporate tax revenues grew 29%, as Kennedy predicted.

Modern Marketing and Political Victory
Who Are the Republicans?