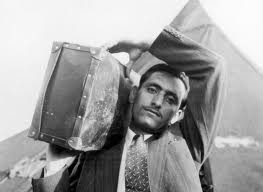 But there were further changes after the war. The Moslem countries emptied out, and the world Jewish population has continued to consolidate over time in fewer countries with large urban Jewish populations over time. The main counter trend in Europe has been Germany, with a large Russian immigrant influx of over 100,000 Jews.

The Jews from Arab Moslem countries went in the main to Israel, but not always. The Algerian Jews, and also considerable numbers of Moroccans (75,000) and Tunisians (80,000), especially the more wealthy ones, went to France, doubling the French community from 300,000 to 600,000 overnight and creating a large Sephardic presence. (The Algerian Jews had French citizenship already in Algeria and had automatic rights of immigration to France.) The vitality of Orthodoxy in France today is largely a result of these immigrants, giving France a high kiruv potential to this day.

Many people do not realize how large and vital the Jewish populations of these Moslem-Arab countries were, with our historical consciousness swamped by Holocaust and pre-Holocaust literature.  A number of these countries would make it to the top ten in numbers, were they to exist today. Morocco had 285,000 Jews, Iraq 140,000, Algeria 135,000, Iran 120,000 and Tunisia an estimated 105,000. Several others would be in the next ten. Libya, which was down to 20 Jews in 1974, had a population of 48,000  in 1948. Egypt had 75,000. Of these, possibly the most tragic was Iraq, for the community there had a direct lineage back to the original exile in Babylonia.

Some 150 Iraqi Jews have managed to leave the country in the past five years, leaving just 38 Jews in Baghdad, and a handful in the Kurdish-controlled northern areas of the country. There are  just two or three young people left. Whereas Baghdad once had 53 active synagogues, only one remains open.  Amazingly, Saddam Hussein’s regime has in recent years shown reasonable tolerance toward the Jewish community, even refurbishing the tombs of Yechezkiel Hanavi and Ezra HaSofer (also considered sacred by Muslims), as well as that of Yonah.

This is a reminder that while the world bemoans the Palestinian refugees (who are defined by a standard much different than other world refugees) little is ever mentioned about the Jews who were expelled from the many Muslim nations that surround Israel. They were quietly and successfully integrated mostly into the modern state of Israel.