An asshole selects a very polite clerk to lecture about tolerance. (tips to Bluegrass Pundit) Her self control says much about her training.

The Chick-Fil-A controversy has gone from the ridiculous to the absurd. Religious Freedom has limits. So does the right to bear arms, free speech and freedom of assembly.  One cannot practice animal sacrifice or polygamy because of religious freedom. Like most such political controversies this is a conflict of rights: the debate is a battle among religious freedom, sexual tolerance, and free speech. The same is true in the conflict between Catholic institutions and government mandates requiring inclusion of birth control options in health care coverage.

Can an institution opt out of  law, no matter how misguided and wrong the law may be, because of religious belief?

The Chick-Fil-A controversy is more about free speech when a GOVERNMENT agent restricts market access to business who have violated no law because of an openly expressed opinion.  Furthermore Dan Cathy expressed an opinion supported by most voters in referendums held as well as by a majority of black voters. Romney got a standing ovation at the NAACP for his support of traditional marriage.

None of this means that Dan Cathy is correct in his opinon, but it does not make him a demon either. Should his immense business success, his generosity in the communities he does business in, the numerous jobs HE has created,  and his stellar quality management be ignored because of this one position?

The selection of Chick-Fil-A for indignation is about more than their stance on the issue:  as a white Christian owned company  they are an ‘acceptable’ target.  I have serious doubts if this outrage would have reached the ridiculous proportions it has if it was owned by  Muslims or other ethnic minorities who expressed the same view.

I am not surprised of the buy-cott backlash.  The need to demonize legitimate differences of opinion plagues us.

If I was to hold every business accountable for their political or social views before I spent my money there,  shopping would become a full time job and I would likely have to do without half of my purchases.

This is a convenient source of outrage because the larger political and economic problems are so overwhelming.  Our outrage is often directed on the understandable trivia rather than relevant complex issues.    It is like the joke about the pedestrian looking under a street lamp for his lost wallet two blocks away from where it went missing because the light was better.

I am also reminded of this episode from Seinfeld. 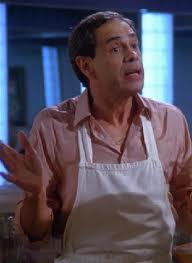