The Right to Health Care 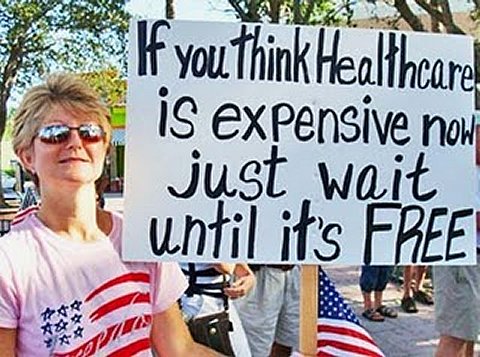 Qualitatively, U.S. healthcare is the finest in the world. Evidence? Americans have a higher survival rate than any other country for thirteen of the sixteen most common cancers.  Tens of thousands of international patients travel annually to the U.S. for medical care, including many from Canada’s system of socialized medicine—not in the reverse direction.

If death by motor vehicle accident is subtracted, the American life expectancy is the world’s highest. Half of the major new medicines introduced worldwide were developed by American companies. American researchers—including Maurice Hilleman at Merck, who developed eight of the fourteen vaccines recommended for mumps, pandemic flu, hepatitis B, and others—played a key role in 80 percent of the most important medical advances of the prior thirty years.  Etc.

The problem is quantitative—its price has become prohibitively expensive.  The cost of a hospital bed alone ranges from $1,000.00 to $1,500.00 per day. Nobel Laureate, Milton Friedman, wrote: “…spending on medical care went from 3 percent of the national income in 1919…to a mind-boggling 17 percent (highest in the world by far) in 1997”—and then continued to rise.

Why is its cost so high? Employers, often forced by the government to negotiate with labor unions, were pressured after World War II to provide health care benefits for many employees.  By the 1960s, millions of American families were no longer paying out-of-pocket for most of their medical costs.

Related: in 1965, Congress established the Medicare and Medicaid programs, to pay for the medical care of the elderly and poor respectively. Medicare and Medicaid, in conjunction with employer-provided health coverage, meant that a third-party payment system dominated the American medical field.

Medical care had, in effect, become socialized. Most Americans had to pay but a modest fee for treatment. Medical care for tens—if not hundreds—of millions was virtually free.

At the same time, state licensing boards restrict the number of physicians, excluding from medical practice competent (often foreign-trained) doctors. Governmental policy has immensely increased demand for medical services while simultaneously curtailing its supply.  The inexorable result was the stupendous rise in the cost of American healthcare.

Government intervention—socialism—is responsible for the astronomical cost of American healthcare.

An individual, not the government, is responsible for his life. Neither food nor healthcare (nor any value) is a right. If possession of X is a right—at whose expense? One man’s “right” to healthcare for which he cannot pay means that the government forces another man to pay for it. What, then, of the robbed man’s rights? An individual has the right only to the healthcare for which he can pay or to which charitable persons—including physicians—voluntarily contribute.

This article is a rich analysis and deserves your reading in its entirety.

The Government Industry
The Price of Clarity