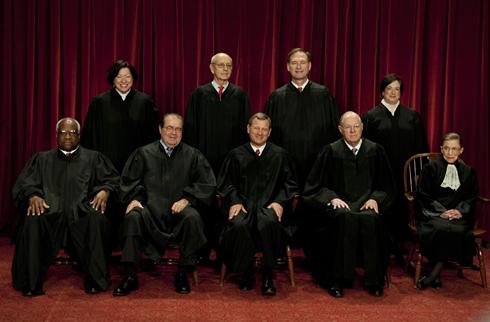 As much as we could wish otherwise the courts do often seem to vote in a political manner.  The president’s power to appoint justices for life has impact far beyond his term in office.

The SCOTUS review of Obama Care is inciting claims of a partisan court.  Some question the legitimacy of the courts, but that seems to depend which view the courts uphold.

Charles Krauthammer questioned the legitimacy concerns in Obama vs SCOTUS in The National Review, 4/4/12.

Having lost the argument, what to do? Bully. The New York Times loftily warned the Supreme Court that it would forfeit its legitimacy if it ruled against Obamacare, because with the “five Republican-appointed justices supporting the challenge led by 26 Republican governors, the court will mark itself as driven by politics.”

Really? The administration’s case for the constitutionality of Obamacare was so thoroughly demolished in oral argument that one liberal observer called it “a train wreck.” It is perfectly natural, therefore, that a majority of the Court should side with the argument that had so clearly prevailed on its merits. That’s not partisanship. That’s logic. Partisanship is fourDemocrat-appointed justices giving lockstep support to a law passed by a Democratic Congress and a Democratic president — after the case for its constitutionality had been reduced to rubble.

I am certainly no constitutional lawyer or scholar, but there certainly seems to be a gap between how the constitution reads and how we want it to read.  This battle, regardless of how the Supreme Court rules, highlights a fundamental difference between the two parties in the balance of power between the individual and the state.

Over time there is a vacillation between liberal and conservative periods.  During more liberal periods the courts have expanded the power of the state. During more conservative periods there may be less rulings expanding the power of the state, but the precedence from the liberal periods are most often left in tact.   Thus the dynamic over time is towards a more empowered state.

There are certainly rulings where a justice’s decision may defy the partisan labels.

Over time the ideas that we use to discern political labels have also changed. Brandeis, considered a very liberal judge in history, often ruled against the state in matters of individual rights and feared the “bigness” of government  as much as he feared the negative impact that the “bigness” of large corporations were having on the society.

Saints and Demons
Will the Fairness Ruse Backfire?