Bricks in a Pick Up 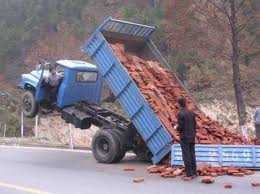 We all benefit from an economy that is growing, but growth is slowed by an endless array of friction costs mandated by the government.  When the economy is robust these friction costs appear to be minimal because they can be easily absorbed.  But these costs accumulate like bricks in a pick up truck.  When new regulations or taxes are imposed the old ones remain.  The accumulation effect of a stream of friction costs is the same as when you overload the pick up truck.  At some point the weight is too much and the suspension collapses and the truck cannot move.  We tend to blame the last brick we put on the truck but the real problem was all the bricks that preceded it.

Each brick that is born by our economy is rationalized and justified for the good it does.  Each department of government loads the bricks with little consideration of the load required by other agencies.  As the Polish poet, Stanislaw Lec noted “Each snowflake in an avalanche pleads not guilty.”

A Preference for Apartheid?
How the UN Spreads Anti-Semitism