When Should You Trust The Experts? 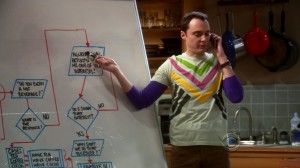 One of the themes I seem to revisit most often is how the intelligent among us screw up so often.  When a candidate is heavily promoted because of his or her intelligence above other characteristics, it makes me want to scrutinize the other qualifications more carefully.

A campaign is not an IQ test, nor is it a cleverness or debating contest.  Intelligence is necessary, but intelligence is not so easy to define and even when it is there are very marginal  benefits beyond a certain point.  I love the character of Sheldon Cooper on the television show, The Big Bang Theory. He is a prodigy and a genius in physics but is woefully lacking of any understanding of basic human relations.  He is almost completely incapable of understanding sarcasm.

“ I urge the regulatory bodies of the U.S. to incorporate an IQ test into their security licensing. No minimum passing grade would be mandated, but no one with an IQ of over 115 would be allowed to work in the financial markets.”

“Finance is too important to be left to smart people.”

Mr. Grant understood that intelligence was sometimes less than an asset; it too often appeared to be a handicap.

This is not to suggest that because intelligence alone is inadequate to understanding and success, that ignorance and inexperience is somehow preferable.  Nor should we fall for the trap that just because a problem was caused by the intelligent that  it must  be solved by the ignorant.

Daniel Kahneman writes in his book, Thinking Fast and Slow that professional expertise is often less accurately predictive than a simpler algorithm enforced consistently. He found this true in the Israeli armed forces in selecting soldiers for advancement,  in the success of portfolios managed by some very highly paid Wall Street Executives, and in the ability of experienced and trained psychologists to predict the outcome of various cases.

This is consistent with the work of Nassim Taleb in Fooled by Randomness and The Black Swan.  Taleb asserted that results often attributed to expertise was often more likely the outcome of random probability.

Kahneman’s studies show that there are psychological factors that keep even the brightest from behaving as the purely rational decision makers that economists assume they are.  People do not naturally behave in statistically sound ways.  We often decide emotionally and then rationalize the decision afterwards.  I call this emotional rationalism.  We like to think we are rational first, especially the intellectuals and the academics, but this is often not the case, especially when it involves an event outside the normal range of outcomes.

Kahneman noted that the stability of the environment is the critical factor.  A chess player with a keen mind and ten thousand hours of practice ( a number found consistently among top performers by Malcolm Gladwell in Outliers) can become familiar with the large but limited number of moves of a game.  While medical outcomes are certainly less finite, a doctor who has studied or experienced a multitude of cases will be better able the predict the outcome of many of the cases he or she encounters.

But in areas with an almost infinite number of variations in outcome, professional expertise  becomes far less valuable and an approach relying more on disciplined objectivity will yield better results.

This is why most investors will do far better with an index fund than a managed account.  It is also why a centrally controlled economy will underperform a free market economy. Both will have errors but the planners will be much slower to correct them.   It is also why I remain skeptical of well credentialed climatologists and scientists who claim to know with any degree of certainty what global temperatures will be decades from now.

As a young man working for me discovered years ago,  90% of being smart is just knowing what you don’t know.