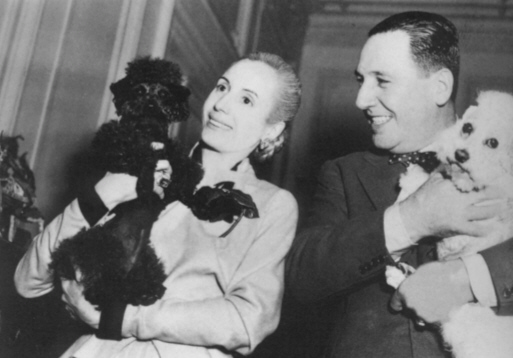 Eva and Juan Peron of Argentina

Some of the most dangerous thinking in public policy happens when the ends are used to justify the means.  Our constitution was designed to move slowly; separation of powers was meant to constrain ‘easy’ changes.  Many social activists lament this.

Bill Clinton had the noble goal to increase home ownership for the poorer Americans.  In retrospect we can ask if there was even a problem there, but that is secondary.  In order to promote this goal he created a model where the regulators teamed up with the regulated to accomplish his goal.  Fannie Mae became adept at lobbying Congress and eviscerating regulators.  Prudent lending standards were compromised, and this carried forward into the corporate world.

A lot of homeowners, not to mention the taxpayers, were put at risk, but as long as the noble goal was being achieved few cared.  And those that did sound alarms were politically muted.

But even after the disaster unfolded little has been done to fix the system to prevent a repeat.  The collapse was a result of a lethal combination of greed and good intentions.  Those who made fortunes in the mortgage bubble were revered because the noble goal was being achieved.  Now they are demonized.

When times are good we believe we can accomplish anything and that we can suspend the very principles that lead us to the prosperity we seek to exploit.  This is the root cause of economic cycles.  Those who preach prudence during these times are marginalized.  Worse they are criticized as being racist or otherwise insensitive to the needs of others.

Economic greed is a fact of life that competition often cures.  Political greed is also a fact of life.  Elected officials are able to make promises without paying for it; and often their reckless policies are not recognized until they are out of office and their million dollar memoires have already gone to paperback.

Many social activists secretly wish for a benevolent dictator to accomplish their objectives without the obstruction of a constitution or traditional principles.  But the problem is that when the dictator is no longer benevolent, he is still a dictator.  The benevolent dictator is the ultimate application of the ends justifying the means.

We have found other means, whether it is judicial activism, unbridled regulation, or unwarranted executive power.  The ultimate results remain the same.

Our political system was based on a need to divide and check government power.  Our regulations have sought to check power in the private sector.  Good regulations do this through transparency, disclosure, and clear and prudent limits.  Poor regulations do this though mandates and manipulation: using power to force the market to accomplish political objectives.  Political self interest can be more dangerous than economic self interest. Millions of consumers restrain what a business can do;  once excessive power is placed in the hands of a central authority (regardless of party) it is far more difficult to restrain.