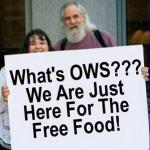 My biggest criticism of the OWS protests is the lack of any clear reasonable objective other than to claim that greed is bad; and then ask for a bunch of free stuff, like tuition loan forgiveness. ( I wonder how the guy who took a job out of high school or could not afford to go to college feels about paying for the tuition of these self anointed.)

But as the movement progressed it attracted every loon with an opinion.  Soon they voiced criticism against the free loading homeless who were eating their food.  The movement fractured into groups with different objectives and opinion.  Soon a leadership elite formed to manage the money and others protested the elite group and who should control the money and the strategy of the group.

They eventually faced issues of law and order, issues that should have been faced early by the real authorities.  And in Atlanta they had to face serious public health issues as tuberculosis broke out.

Should those spouting vicious anti-Semitic remarks be censored and marginalized or should their free speech be respected?  Should the food be shared by the homeless or should it be reserved those who were committed to the cause?

In thirty days this utopian protest faced real problems that are faced by the grownups in a normal society.  But unlike the real solutions that involve rules and conflicting opinions that reach common goals in a civil manner, these assholes created a public health hazard, screamed, raped, defecated in public and stood for nobody but themselves.

Meanwhile, an unfathomably asinine dispute rages over whether the movement should seek to represent the “100 percent” or the “99 percent,” with few taking the time to consider whether it actually does either. The homeless, much praised on placards and flyers, have clearly proven themselves useful only in the abstract, and have become a rather less attractive proposition now that they have joined the fray, bringing with them something of a crime wave.

The idea that the camp represented something new by bringing a diverse group of people together was always solipsistic. Surely, I would ask, that is what America does? What is this country if not a grouping of different people who disagree, and who work out their differences through common institutions?

Every citizen has at least one gripe. There is something that abrades each and every one of us. But most of us do not join communes that earnestly and loudly pretend to be above the noisy and boisterous process we call democracy, even as our replacement society crumbles ignominiously around us.

Perhaps the OWS movement is more valuable that I originally gave it credit for.  They have shown why we have social institutions and how they solve social problems with conflicting opinions.  They have shown us how society should work by clearly showing us how it shouldn’t.

Capital and Labor
The Narcissism of Minor Differences