The Core of American Exceptionalism 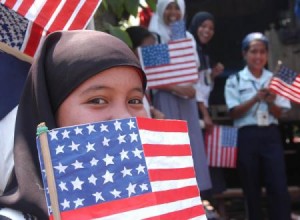 I have long contended that what makes America unique is the way that we assimilate unlimited diverse cultures without losing what makes them unique. We may be Irish, Italian, Muslim, Jewish, Asian, or Hispanic, Hindu or Catholic, but we shop at the same stores, use the same banks, and address our differences in the same courts.

Jeff Jacoby articulated this far better than I have in Making Americans in The Boston Globe, 11/23/11.

The key to what Peter Salins, a scholar at the Manhattan Institute, calls “assimilation, American style” was a balancing act. On the one hand, newcomers streaming to the United States found out quickly that they were expected to become honest-to-God Americans. That meant learning English, getting a useful job, embracing America’s democratic values and institutions, and eventually taking the oath as new citizens.

On the other hand, immigrants weren’t obliged to shed their ethnic pride, or to drop the foods and customs and festivals they brought with them from their native land. They were free to be “as ethnic as they pleased,” writes Salins. The goal of assimilation was not to make all Americans alike; it was to get newcomers, however dissimilar their backgrounds and cultures, to believe that they were “irrevocably part of the same national family.”

There was one other key ingredient, which we too easily overlook. Immigrants understood that the country they had come to was in some indispensable way better than the one they had left. They might retain a soft spot for the scenery or clothing or rhythms of life in the old country, they might always prefer their mother tongue to English, they might even pay tuition at a private or parochial school so that the religious or linguistic values they had grown up with would be passed on to their kids.

But underlying everything would be the awareness that they had chosen to be Americans. America was better than their native land — perhaps because its rulers were corrupt, or because it was riven by war, or because economic opportunities were limited. Perhaps, as in my father’s case, because totalitarian tyrants – first Nazis, then Communists – had made life there a hell on earth. Perhaps because, like the Pilgrims, they sought a peaceable society where they could worship as they saw fit without being “hunted and persecuted on every side.”

It is interesting that our two biggest holidays are our celebration of independence and a day to offer gratitude for the country we became.

Have a Great Thanksgiving.

The Misallocation of Capital
The Master of Our Circumstances