A Fading Shade of Green

It is ironic that the greenest president presides over the demise of the green industries while a new oil boom is making us more energy independent in spite of policies intended to stunt the growth and development of fossil fuels.  The jobs boom is not coming from the development of green energy, but it is coming from the ‘dying’ oil sector.  More and more countries are withdrawing from the Kyoto Accords and and more and more scientists have become skeptical of the absolutism of politically influenced science used to promote extravagant solutions to climate problems that may not exist, or at least may be beyond the cause or the control of human action..

“Green” will never be quite the same after Obama. When Solyndra and its affiliated scandals are at last fully brought into the light of day, we will see the logical reification of Climategate I & II, Al Gore’s hucksterism, and Van Jones’s lunacy. How ironic that the more Obama tried to stop drilling in the West, offshore, and in Alaska, as well as stopping the Canadian pipeline, the more the American private sector kept finding oil and gas despite rather than because of the U.S. government. How further ironic that the one area that Obama felt was unnecessary for, or indeed antithetical to, America’s economic recovery — vast new gas and oil finds — will soon turn out to be America’s greatest boon in the last 20 years. While Obama and Energy Secretary Chu still insist on subsidizing money-losing wind and solar concerns, we are in the midst of a revolution that, within 20 years, will reduce or even end the trade deficit, help pay off the national debt, create millions of new jobs, and turn the Western Hemisphere into the new Persian Gulf. The American petroleum revolution can be delayed by Obama, but it cannot be stopped.

With all of the enormous political power at his disposal, the president is unable to fight true market forces.  The crony capitalists who see enormous campaign donations as the same kind of investment as capital equipment and technology are able to suck large sums from the public trough until the market reality that their product cannot survive in a true market becomes obvious.  It is one thing for an objective investor to place his fortune at risk to develop new technology; it is quite another for a public official to place taxpayer money at risk while making endless efforts to hobble competitive energy options.  Markets move at a much faster rate than government.  This is the reason that such government solutions are always fighting the last war and ignorant of the developments that refute their best and most corrupt efforts. 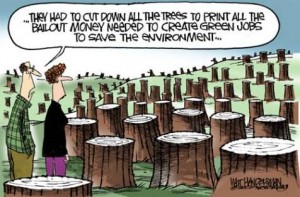 The Socialism of Fools
Outsourcing Morality