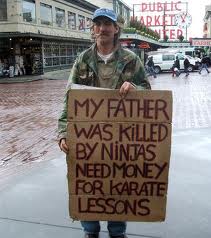 The Obama Jobs Bill is just so awful that I predict many Democrats will not support it.  After the losses they faced in 2010 and the particular losses in the recent interim elections- especially Anthony Weiner’s seat in New York- support for this bill is just too risky.

Good economics is not party sensitive.  This bill is just bad economics.

From the Wall Street Journal, 9/20/11- The Buffet Alternative Tax:

If Mr. Obama really wants all of these people to pay even more in taxes, there are only two ways to do so. One is to raise tax rates on capital gains, dividends and other investment income that is taxed at 15% and represents a great deal of income for the wealthy. This is probably Mr. Buffett’s tax secret, though to our knowledge he hasn’t released his returns to the public.

The problem is that this is a tax increase on capital investment, which the U.S. already taxes at prohibitive rates thanks to our high corporate tax rate of 35%. Capital gains and dividends are taxed twice, first as corporate profits and then as payouts to individuals. Their real capital gains tax rate is closer to 45% than 15%, which is why politicians of both parties have long supported a capital-gains rate differential.

The other way to raise taxes on the rare Buffett is with a new Minimum Tax, a la Joe Barr. But as we’ve seen with the AMT, while the politicians may start by chasing “millionaires and billionaires,” over time they always end up taxing the middle class because that’s where the real money is. Mr. Obama could tax every billionaire in America at a 100% rate and still wouldn’t make a dent in the federal deficit. He would, however, succeed in making those taxpayers invest less and search for tax shelters, assuming they didn’t move offshore.

From the National Review, 9/19/2011- the History of the Millionaire’s Tax by Andrew Stiles

Senate Minority Leader Mitch McConnell (R., Ky.) pointed out on Meet the Press that both parties have rejected the idea in the past. “We had that vote a couple of years ago when Democrats basically owned the Congress, they had overwhelming control of the Senate and the House, and it was defeated then,” he said. “So I would simply go back to what the president said last December in signing a two-year extension of the current tax hikes: It’s a bad thing to do in the middle of an economic downturn.”

Now it seems that Obama has blatantly ignored his own advice by calling for $1.5 trillion in new taxes over the next decade. When he announced his recent jobs plan (and his plan to pay for it by raising taxes) in an address to Congress, Obama assured us, “This isn’t political grandstanding. This isn’t class warfare.” Republicans couldn’t help but laugh. Needless to say, the president’s “plan” has no chance of making it past Congress. On the plus side, American voters are beginning to get a pretty clear sense as to the policies that await them should Obama be elected to a second term in 2012.

How do you get jittery businesses to hire? Threaten to sue them if they hire someone who already has a job! At least, that’s how the White House thinks. It stuffed in a provision to make it illegal to “discriminate” against the unemployed when hiring.

The misguided wasteful loans to Solyndra while his adminsitration blocked Boeing from creating real jobs in South Carolina was referenced in this blog a few days ago in A Tale of Two Companies:

These two companies are clear examples of why Obama has lost all credibility on creating jobs.  His absolute inexperience in the private sector and his undying faith in the government to solve all problems has made a bad situation worse.

“$250,000 makes you really rich in Mississippi but it doesn’t make you rich at all in New York and there ought to be some kind of scale based on the cost of living on how much you pay,” Schumer said.

I guess he is proposing that we tax those in Mississippi more than those in New York.  Other Senate Democrats such as Jim Webb and Mary Landrau noted in Politico, Obama jobs bill picked apart by congressional Democrats:

“Terrible,” Sen. Jim Webb (D-Va.) told POLITICO when asked about the president’s ideas for how to pay for the $450 billion price tag. “We shouldn’t increase taxes on ordinary income. … There are other ways to get there.”

“That offset is not going to fly, and he should know that,” said Democratic Sen. Mary Landrieu from the energy-producing Louisiana, referring to Obama’s elimination of oil and gas subsidies. “Maybe it’s just for his election, which I hope isn’t the case.”

This bill is ill informed, economically destructive, political grandstanding and demagoguery at its worst. It represents a pathetic new low for a president who has already under performed our lowest expectations.