A Destructive Obsession with Unions 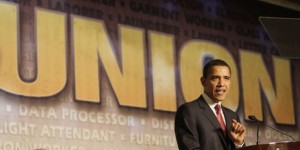 While he speaks of yet another jobs plan, this president consistently takes actions to kill jobs.  He is placing the active promotion of unions over job growth. In his fantasy land of fairness this makes sense, but anyone with business sense or experience (and his administration has very little) knows this is a sure way to kill jobs.

Early in his administration with the Democrats controlling both houses and the White House there was talk of a union card check bill that would have eliminated secret ballots for the workers in union elections.  Federal Express placed an order for 30 jumbo jets with language in  the purchase order allowing cancellation of half the order if this bill passed.  Domestically domiciled companies made plans to relocate overseas to avoid this intrusion into their affairs.  During the business panic in 2009 when this bill was being discussed several small businesses I knew spoke of this being the straw that would lead them to decide to shut down .

The card check bill was being considered at the same time as cap and trade, another abusive job killer. Fortunately these bills became sidelined as the Democrats focused their efforts on Obamacare, yet another job killer.

More recently The NLRB has held up the Boeing plant location in South Carolina, leaving 1,000 new jobs in limbo, all in the name of protecting union jobs in the state of Washington, even though there was no layoff of union workers as a result of this new plant.

Without any congressional approval the NLRB gas now issued an edict requiring all companies to post notices of the workers right to organize.  This may just seem like a harmless notification to this clueless president, but to the small businesses out there it is an outrage and it will kill job creation.

To many of us who have had experience with union attempts they too often act like liars and thugs.  For the government to make such overt attempts at cramming them down the throats of small business will just add another in a growing list of incentives to retire or close their business early, sit on their cash, and avoid any growth or new hiring.

Of all the special interests that have been decried for their destructive influence this administration’s obsession with promoting his union supporters is the most destructive.