Over Their Head and Still Digging 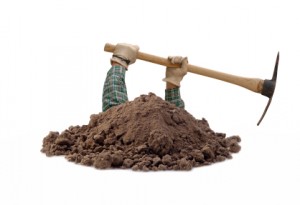 In the 1970’s the delinking of the dollar from gold under Nixon ushered in  a decade of inflation.  The wealthy and other investors sought refuge in tangible assets and foreign currencies.  Tangible assets had the advantage of not generating 1099 and W-2 income that was subject to tax.  Inflation pushed people into higher tax brackets, making the marginal tax rates especially onerous.

Americans decided it was better to buy a second home, collect art or gems, and anything tangible that became more valuable with inflation rather than work harder to make more money that was lost to bracket creep and taxes.

Howard Ruff, Harry Brown and Doug Casey were the hard asset crowd teaching middle class investors how to own gold and Swiss Francs.  While still in my twenties I opened up an account at a Swiss bank with a mere $10,000.

Unexpected to the hard asset gurus, Fed Chairman Volcker, named under Carter, and Reagan got inflation under control and restored the value to the dollar.  Two dramatic results occurred.  Wealth was moved from hard assets to financial assets.  The incredible growth in the wealth in the upper income was largely a result of this shift.  It was less because the wealthy were getting a bigger share of the pie than because their assets went from unmeasured tangible assets to readily measured financial assets.  This was a result of less inflation and lower taxes on marginal income.

The second effect was a flood of capital from foreign countries to the United States.  These two shifts propelled the stock market of the 1980’s.  The freeing of domestic capital and the attraction of foreign capital created jobs, new companies and an increase in wealth across all income categories.

Today as a result of higher inflationary expectations, a weaker dollar, higher taxes, and massive regulation especially of the financial sector we are seeing domestic capital going overseas to find better opportunities and we are seeing a reduction of foreign capital seeking opportunities in the United States.  Foreign investment here is up since 2009 but still down from 2008. But the combination of domestic and foreign capital is down and that is bad for future unemployment and revenue that this government direly needs.

Without the kick in reported income that came from the shift in the 1980s we may not expect that tax decreases would yield the same results they did then, but raising taxes on a declining revenue base and a weakening dollar is a losing game.  This administration is in way over its head and they are still digging.

Exxon Profits
How to Make a Problem Worse