The Laffer Curve is an explanation of the dynamic effects of tax increases or decreases. In its basic model it looks like this: 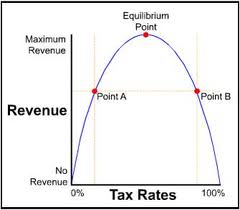 Of course this is a model to explain that there are points where raising tax rates may yield lower dollar tax revenues. But in reality the curve is not a symmetrically even curve.  It could look like this: 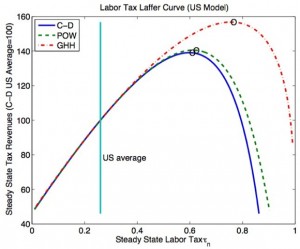 To look at this curve and where the U.S. average lays there is room to raise taxes that will generate more revenue. But this is an average and as we know if you have one foot in the oven and one  foot in the freezer on average you are comfortable.  The point is that the curve may have a different shape for different taxes; a tax on wages may plot different than a tax on dividends and capital gains, and the plot may vary over time depending on the ease of avoiding the tax,  competitive foreign rates, and other friction costs besides taxes. 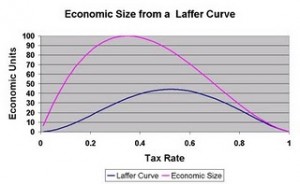 If the curve leans more left then perhaps there is less room to raise taxes.

There are some very clear examples where reducing specific taxes  has increased tax revenues.  Such as the corporate tax in Iceland:

The actual shape of the curve will impact the results and it may be very difficult to ascertain the actual shape. The shape will change based on other friction costs, competitive rates from other countries, and the nature of the tax being considered.  Most importantly the Laffer Curve ONLY focuses on the tax revenue as a function of the rate. Perhaps a lower tax rate may raise less revenue but will generate a much more robust economy with lower unemployment and much more growth and innovation.  There is more to a successful society than maximizing government revenue.

The Laffer Curve is most important in illustrating effectively that merely raising tax rates may not increase revenues, but there are other factors that determine how effective policy based on this principle will be at any given time.  As the graphs above indicate where we are on the curve can make a big difference depending on whether it is leaning left or right, which taxes are being considered, and what our ultimate objective is.

Closing the Curtain on Keynes ?
Growth, Not Taxes, Will Increase Revenues