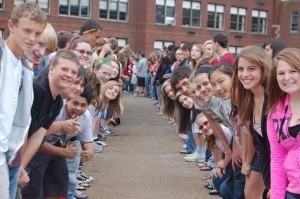 People are invariably shocked when Mr. Doll tells them that in 1995 the U.S. produced roughly 25% of the world’s goods and services and in 2010, after 15 years that included a tech bust, a terrorist attack and a housing bust that triggered a financial crisis, the U.S. was still producing that same 25% of global GDP.

How is this possible given the rapid rise of China and India? Mr. Doll says the increase in emerging markets’ share of the world economy has come “at the expense of mostly Japan and a bit Europe. The U.S. has held its own, which I think is a statement of our ability to be productive in a tough world.”

Freeman suggests that we get so focused on our problems, which are real and many, that we lose sight of our relative competitive posture. Like the two guy being stalked by the single tiger, one of the potential victims realizes that he does not have to outrun the tiger, he just has to outrun the other guy.

America’s big advantage over Europe and Japan is our growth in population, including immigration.  India’s advantage over China is its population growth.  I would add that its capitalistic activity is from the bottom up rather than the top (government decreed) down. India also has an advantage of British institutions and the absence of decades of communist rule.

Mr. Doll explains the economics: “The long-term growth rate of any economy is the product of the change in the size of the work force multiplied by the productivity of the work force.” Productivity is very hard to predict, he reports, but demographics is easy. “You count noses.” And that tally shows a very healthy America.

But doesn’t Mr. Doll smell trouble on productivity? It rose just 1.3% in the first quarter compared to the same quarter last year. He says that U.S. productivity is “OK and better than lots of other places.” This is a recurring theme of our discussion— that America is the least worst among the major developed economies.

He is concerned about the regulation overload, particularly Obama Care and the Dodd Frank Bill, and these do negatively impact growth and productivity.  Inflation and unemployment are realities and concerns but he contends that the combination of an entrepreneurial spirit and the population advantage counteract these fears.  Just the fact that deficit reduction is now a common subject is encouraging.

Our advantage is relative but real.  We are more like “the best house in a bad neighborhood”.

We can do better.

From the Trenches 6.3.2011
Crony Capitalist in Chief