The Moral Equivalency of Thomas Friedman 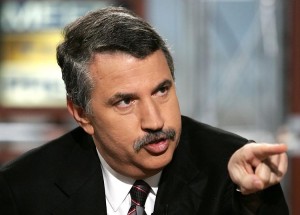 I confess that I do not count myself among the Thomas Friedman sycophants.  I have read some of his books and I just find him trying so hard to be “intellectually balanced” that he often ignores the obvious and the reality all together.  It belies an attitude that there is a truth that only he possesses and the rest of us are intellectually primitive ideologues not to see the obvious road he so generously bestows on us in his New York Times columns.

His column from the New York Times on 5/24/11, “Lessons from Tahrir Square” is a prime example of an attempt to disregard the obvious in order to make a balanced argument.

when it comes to ossified, unimaginative, oxygen-deprived governments, the Israelis and Palestinians are right up there with pre-revolutionary Egypt and Tunisia. I mean, is there anything less relevant than the prime minister of Israel going to the U.S. Congress for applause and the leader of the Palestinians going to the U.N. — instead of to each other?

As for Bibi, his Tahrir lesson is obvious: Sir, you are well on your way to becoming the Hosni Mubarak of the peace process. The time to make big decisions in life is when you have all the leverage on your side.

This idea of drawing an equivalency between Israel and the Palestinian efforts toward peace is absurd.  Not to discount counterproductive actions taken by the Israelis there is no equivalency.  Start with the results.  Israel by any objective observance has built a nation; a modern productive, democratic nation.  The Palestinians have turned down the opportunity to have a nation for 50 years.  Israel has built hospitals, schools, industry, museums and a vibrant culture. The world has spent more money on the Palestinians that they spent to rebuild Europe after WWII and what do they have to show for it?

The Israelis do not parade school children around in suicide vests and take pride in teenage suicide bombers. Those who commit such atrocities, which are rare,  are not heralded as heroes but cause a deep shame for the nation.  There is no call to wipe out the Palestinians.  Claims of “genocide” against the Palestinians are laughable.  Populations do not grow during genocides.

Israelis do not rain down rockets on civilian population. When combat operations do require engagement in civilian areas, which is often given how the Palestinians will use civilians as fodder to create a misleading narrative  of oppression, the Israeli troops take great effort to avoid and minimize civilian casualties.

Israel has a Muslim minority with rights of citizenship. They vote, sit in the Knesset, own property and enjoy religious freedom.  You can hear their call to prayers loudly broadcast from a PA system in the Temple Mount right next to the Jews’ holiest site; the western wall.  In discussions of a Palestinian state it is assumed to be ‘Juden free’.   Jews are expected to be uprooted.

The comparison with Mubarak’s role escapes any sense of reality.  Unlike Mubarak, Netanyahu was freely elected. The Knesset debates with an intensity that makes our Congress look like they have been lobotomized.  Israel has provided a home for the Jews who were thrown out of Egypt in 1948; what have the Egyptians done for the Palestinians?  There is no need to riot in Israel; they can just vote.  Illiteracy and the resulting unemployment is absent in Israel, and this is while being in a semi-permanent state of war.

To even suggest that Bibi has all the leverage on his side is incomprehensible.  Yes they have a strong military, but honestly Thomas, have you looked at the fucking map? Have you read the press about Israel in Europe or even that paper that you call home?  Have you noticed how the UN has treated Israel?  Is there any other nation that faces an existential threat that is unchallenged on the floor of the UN?  To suggest that they should unilaterally forfeit any semblance of security to satisfy your retarded sense of equivalency is ridiculous.

So called intellectuals like Friedman think that such equivalency is a sign of a superior thought process.   The inability to distinguish right from wrong or the unwillingness to support a side that supports the freedom of its citizens and its right to defend itself is not a sign of a higher intellect.  Moral equivalency does not make you smarter; it makes you a coward and a fool.