100% of Nothing is Less than Nothing 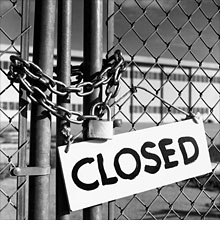 Working Up a Tax Storm

Storm, 42, is founder and chief executive of FatWallet.com. The company, until recently one of about 9,000 Illinois “affiliates” of Amazon.com, directs online shoppers to online retailers, which often pay affiliates commissions for referrals that result in sales. Storm’s company, which has 54 employees, used to be located in Rockton, Ill., but now is five miles up the road in Beloit, Wis.

Illinois, comprehensively misgoverned and ravenous for revenue, has enacted what has come to be called an “Amazon tax.” It requires Amazon and other online retailers to collect the state’s sales tax.

Storm responded by relocating to Beloit. No one knows how many other Illinois affiliates of the thousands of online retailers — transactions with Amazon are less than 1 percent of FatWallet’s business — will lose revenue, pay less in taxes, cut jobs or leave the state. When Texas sent Amazon a bill for $269 million because of the “nexus” of its Dallas warehouse, Amazon decided to close the warehouse.

It is practically intellectually retarded to expect to raise taxes and not have the tax payers respond in a way to counteract the tax increase. States have repeatedly seen the wealthy and the producers leave when they are overtaxed, and the resulting  tax revenues plummet.

When and if this tactic is reversed it is not likely that the company that just moved its plant will move it back.  The loss in revenue is often irreversible.

Federalism — which serves the ability of businesses to move to greener pastures — puts state and local politicians under pressure, but that is where they should be, lest they treat businesses as hostages that can be abused. According to the Tax Foundation, Illinois has not only the fourth-highest combined national-local corporate income tax in the nation but also in the industrialized world. In Peoria, Doug Oberhelman, chief executive of Caterpillar, has told Illinois Gov. Pat Quinn that he is being “wined and dined” by other governors and their representatives encouraging Caterpillar to invest in their states.

It recently picked Muncie, Ind., for a major manufacturing plant. Says Indiana Gov. Mitch Daniels of his neighboring state, “It’s like living next door to ‘The Simpsons’ — you know, the dysfunctional family down the block.”

In January, a lame-duck session of Illinois’ legislature — including 18 Democrats who were defeated in November — raised the personal income tax 67 percent and the corporate tax almost 50 percent. This and the increase — from 3 percent to 5 percent — in the tax on small businesses make Illinois, as the Wall Street Journal says, “one of the most expensive places in the world to conduct business.”

Is it possible that it is more than ignorance?  Is it the crony capitalism of big companies like Walmart using legislative influence to hobble their competition?

The Origin of the Intellectual
A Moral Tyranny