Falling Through the Financial Cracks 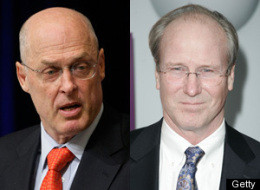 When those who point fingers seek blame for the financial crisis of 2008 (we are yet to have an official historical name for this disaster) the common refrain is deregulation of the financial industry, but some examination seems to be that we were buried in regulation in many areas while bereft in others.

While partisans commonly blamed Bush for the deregulation that many believe caused the crisis, both of these bills were signed by Bill Clinton.  Yet these laws were largely supported by both parties and Republican Senator Phil Gramm had a leadership role in both.

At the time there were a lot of factors in the market that led both parties to believe these reforms were wise.  It is not entirely certain how significantly these reforms contributed to the depth of the crisis.  Canada, for example, experienced similar deregulations without nearly as severe a consequence.

What strikes me about the background of the deregulation in the Commodities Futures Modernization Act is how complicated the entire system was and how many different regulatory agencies we had.  The FDIC, the SEC, the CFTC, Fannie Mae, Freddie Mac, The Treasury and the Federal Reserve all had spheres of authority.   Banks regulated by the FDIC generated mortgages that were securitized by investment banks regulated by the SEC.  These mortgages were insured by Fannie Mae and Freddie Mac and were often insured by futures products that were regulated by the CFTC.  While the Treasury under Paulson took control when a meltdown was imminent, the Treasury was not normally directed to oversee the  coordination of the other agencies.  Nor was the Fed.

Watching the HBO production of  Andrew Sorkin’s Too Big To Fail, Paulson was taken by surprise by the collapse of AIG.  Within days of announcing that the era of bailouts was over while Lehman Brothers was allowed to go bankrupt, Paulson announced the bailout of AIG.  He really had no choice.  As Barney Frank observed we actually had a free market if only for a few days.

While the list of failures certainly included regulatory failures it certainly was not from want of regulatory agencies.  While some contend that the agencies were not properly staffed to regulate properly, it seems that the bigger problems were the lack of commitment from the leaders of the agencies, the lack of understanding of risk on the part of the legislators and the firms who capitalized on the changes in the law, and most of all, the complicated and decentralized structure of our regulatory agencies.  With multiple agencies overseeing different sectors of the financial system that were becoming increasingly interrelated it seems highly probable that some significant factors would fall between the cracks.  The risk posed by the massive positions taken by AIG to insure risky mortgages found a crack.

There seems to be a need for some centralized coordination of the financial system and the related agencies, but the perspective needs to come from outside normal government channels.  I doubt this would be enough to overcome congressional hubris is passing laws they do not understand, or enough to overcome the political influence of huge financial institutions.  The Fed for all of its flaws is the closest we have come to a financial authority that is removed from political influence, but that may not be saying much.

The real enemy may not be greed, but complexity.  Our regulatory structure may be unsuitable for the level of complexity we allowed. Some of our brightest and most experienced professionals seemed incapable of understanding the risk we were incurring.