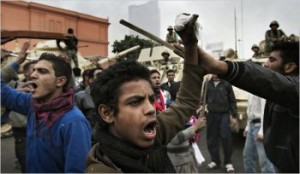 Egyptian Youths take to the street

As we try to predict what the outcome will be in Egypt we tend to compare it to the last similar conflict, which many think is Iran. But the mistake in Iran began in 1953 when Mohammad Mosaddegh, a democratically elected popular ruler was overthrown largely by our CIA and replaced with the unpopular Shah. This action combined with the growing tide of Islamic fundamentalism led to the Shah’s overthrow by the Ayatollah. By the time the revolution happened there was not much Jimmy Carter could do about it, as pathetic as his efforts were. 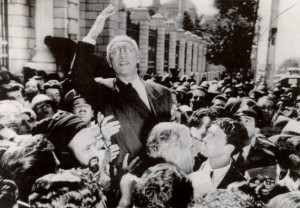 The wave of unrest throughout the Arab Middle East is also a culmination of religious fundamentalism, poverty (in spite of the oil resources), widespread illiteracy, and a demographic explosion of young people.  In short it is a cultural development that is going in the opposite direction of western modernity, and the economic renaissance of the far east.  We have depended on autocrats to use authoritarian means to keep this backwards cultural shift under control and it cannot longer be contained.  Once again our president can do little to control it .

While many praise the rise of democracy in the Middle East, democracy is secondary to a more civilized and open society.  Our success is based on the true classically liberal values of individual and minority rights, freedom of religion, free speech, the rule of law, and an open society.  It was these values that gave rise to democracy, not the other way around.  Democracy without these values is just mob rule.

The French Revolution took place only a few years after the American Constitutional Convention.  While our new government was just embarking on their noble experiment they must have watched in shock as the French Revolution, originally embracing many of the same values as our delegates,  descended into the reign of terror. 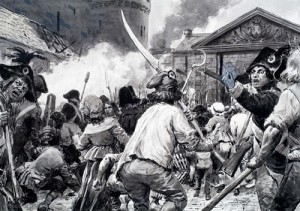 Our democracy has survived because of the rule of law and common culture that supports the values of an open society.  George Bush ignored warnings about pushing  for elections in Gaza, where the cultural values we associate with a functioning democracy were clearly absent.

Egypt will likely see a conflict between its secular population and its religious fundamentalists such as the Muslim Brotherhood.  With Mubarak out we can hope that the military will affect a stable transition, but we should fear a rise of another radical theocracy.  Egypt has enough national pride that they may resist being anyone’s puppet: ours or Iran’s.

The real power in the Middle East is not in the halls of government where we spend our efforts but in the Mosques where the values of the people have rendered politics almost irrelevant.  As much as we try to separate religion from government this puts our diplomacy at a distinct disadvantage.

This leads us to few good options, but acquiescing to values totally contrary to our own is certainly not one of them.  In the face of such open hostility we must remain committed to the true liberal values (not the bastardized version we face today)  that make democracy work and not fall prey to the democracy of mob rule.  While authoritarian control was not sustainable we should not assume that the people will settle for a religious theocracy either. The internet may be more influential than we realize.  The people in the street may be clear what they do not want, but at some point soon to come they will begin to clarify what kind of country they do want.

Equality vs The Rule of Law
Walden Regulated