The Limits of the Federal Reserve 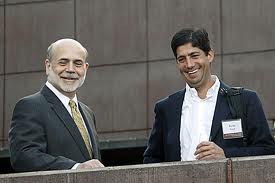 Kevin Warsh writes in the Wall Street Journal, The New Malaise and How to End It.

I have contended that the Fed under Bernanke is committed to doing whatever it takes to stimulate the economy, but that any benefit of the Fed’s actions is undermined by the government’s fiscal  actions. This includes new laws, significantly more regulations, expected tax hikes and crippling uncertainty.

Fiscal authorities should resist the temptation to increase government expenditures continually in order to compensate for shortfalls of private consumption and investment. A strict economic diet of fiscal austerity has greater appeal, a kind of penance owed for the excesses of the past. But root-canal economics also does not constitute optimal economic policy.

Pro-growth policies include reform of the tax code to make it simpler, more transparent and more conducive to long-term investment. These policies also include real regulatory reform so that firms—financial and otherwise—know the rules, and then succeed or fail. Regulators should be hostile to rent-seeking by the established, and hospitable to the companies whose names we do not know. Finally, the creep of trade protectionism is anathema to pro-growth policies. The U.S. should signal to the world that it is ready to resume leadership on trade.

The deleveraging by our households and businesses is not a pattern to be arrested, but good prudence to be celebrated. Larger, more liquid corporate balance sheets and higher personal saving rates are the reasonable and right responses to massive government dissaving and unpredictable government policies. The steep correction in housing markets, while painful, lays the foundation for recovery, far better than the countless programs that have sought to subsidize and temporize the inevitable repricing. It is these transitions in our market economy—and the adoption of pro-growth fiscal, regulatory and trade policies—that lay the essential groundwork for greater, more sustainable prosperity.

Monetary policy also has an important role to play. However, the Federal Reserve is not a repair shop for broken fiscal, trade or regulatory policies. Given what ails us, additional monetary policy measures are poor substitutes for more powerful pro-growth policies. The Fed can lose its hard-earned credibility—and monetary policy can lose its considerable sway—if its policies overpromise or under deliver.