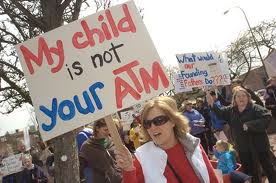 We are living in interesting times.  While the professional economists are trying to figure out what happened we have all become economists of sorts just to try and understand the events that greet us every day.

With huge deficits many would expect inflation as another weak willed government resorts to the printing press to solve its problems.  In response we are saturated with ads to buy gold, the default inflation hedge.  Yet I well remember the inevitability of inflation in the 1970’s as gold passed $800 an ounce; only to hit the Reagan/ Volcker wall.  Inflation fell as did the price of gold.  In inflation adjusted dollars gold has yet to recover over 25 years later.

Retired economist Scott Grannis, in his excellent blog, Calafia Beach Pundit, explains how we can be looking at record low bond yields and interest rates while the deficit hits and record levels and  inflation remains tame.  It is a subject that has puzzled me. Read A bond bubble?

So perhaps there is, in addition to weak growth expectations, an inordinate fear of the future: a fear of big tax hikes, and of a prolonged economic malaise caused by an overbearing state that absorbs the fruits of and smothers the private sector. Japan comes to mind, with its massive deficits, a debt/GDP ratio that has been well into triple digits for years, and sluggish growth. Perhaps it’s the case that as debt approaches and exceeds 90% of GDP the economy simply loses much of its forward momentum, a thesis supported by the findings of a recent research paper by Rogoff and Reinhart. There’s even some support for this thesis in our own history—muddled of course, by WWII—when federal debt surged to 120% in the early 1940s, even as 10-yr yields traded at 2% or so.

If the market is scrambling to buy bonds yielding 2.5% or less, it only makes sense if market participants hold little or no hope for a better alternative in the foreseeable future on a risk-adjusted basis.

It also makes sense that today’s almost-zero yields on cash, extremely low yields on risk-free bonds, and massive debt sales become in a sense a self-fulfilling prophecy. Low yields represent very low hopes and aspirations on the part of the private sector, while the bonds being sold and the money absorbed from the private sector by our federal deficit are being used to fund a level of spending and wealth redistribution such as we have never seen before.

We’re not witnessing a bond bubble in the making, we’re living in a statist nightmare.