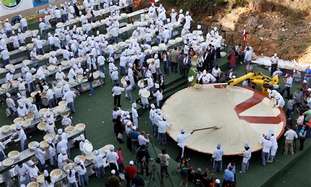 Lebanese cooks have whipped up more than ten metric tons of hummus, breaking a world record previously held by rival Israel on Saturday.

The gigantic serving of the popular Middle Eastern chickpea paste is the latest shot in the two countries’ ongoing war to assert ownership over the dip.

Some 300 Lebanese cooks on Saturday prepared the huge batch of hummus that weighed in at 22,046 pounds (10,452 kilograms), more than doubling the previous record of around 4 metric tons set in January by cooks in Abu Ghosh.

You are Responsible for Your Contractor
People vs Categories