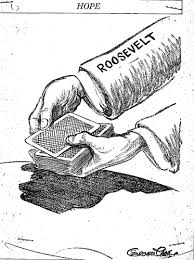 “It is a matter of record that many of the leading decision makers of the New Deal administration in the 1930s were advocates of government intervention in the economy and of a fundamental restructuring of the economy-a New Deal- years before the stock market crash of 1929 and the Great Depression that followed, which put them in a position to carry out ideas to which they were dedicated long before there was any economic crisis to deal with. The New Deal  succeeded in using a transient crisis to create enduring institutions, including among others the Federal National Mortgage Association or “, Fannie Mae,” which FDR created in 1938, and which has been at the heart of the housing boom and bust that led to today’s financial crises.”

Thomas Sowell in The Housing Boom and Bust

HKO Comments-  “A crisis is the rallying cry of the tyrant.”  Reagan successfully resisted a call to intervene after the 25% drop in the Dow Jones in 1987. Few remember but many wondered if such a large one day drop was not a precursor to another Depression.  He let the market repair itself and it rose 10,000 points in the ensuring decade. Not every short term crisis requires a long term solution

The Irony Curtain
Observations from the Road