Retail sales are down sharply. Steel mills are running under 50% capacity. Auto sales have skidded to a stop. Several restaurant chains have shut down. Circuit City has closed, abandoning its newest local location without ever turning on the lights. Bankruptcies and unemployment are still rising to historical highs.

Yet there is one business that is doing very well: guns. 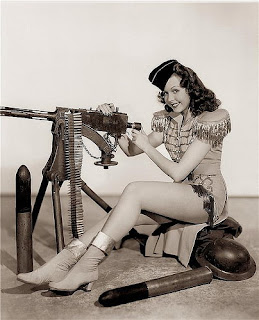 Gun dealers are having record sales. In fact certain sizes of ammunition are almost impossible to find. .380 caliber used in many small semi-automatics is practically unobtainable, and 9mm, also commonly used in small concealed carry weapons was getting harder to find.

It isn’t hard to figure out why. There is a perception, right or wrong, that a Democratic House and Senate with a Democratic President will eliminate or sharply restrict the right to bear arms. On the campaign trail Obama spoke of a big tax on ammunition; today we have a shortage as consumers are hoarding guns and ammo.
Even controversial rights become dear when we fear we are about to lose them. Just the discussion of curbing gun ownership is enough to create the demand and fear that leads to hoarding.

The last time we saw such activity was during the Clinton administration’s enactment of the Brady Bill. Guns sales went through the roof. People who had never thought of buying a gun bought several because they thought they were about to lose their right. Many of these people knew little about the weapons they were buying.
The Brady Bill restricted the magazine capacity you could buy with a gun to ten rounds; yet you could buy a higher capacity magazine later and use it with the gun. A .223 rifle with a wood stock was a hunting rifle and Ok but the same gun with a black plastic stock was deemed an assault rifle.

Few voters realized that fully automatic weapons had been banned since 1938, and that such weapons were very rarely used in criminal activity except on television fiction.

But the irony here is that two relatively anti-gun Democratic presidents both earned the gun salesman of the year award (figuratively). Clinton and Obama have each done more to sell more guns to more Americans than any other president. And President Obama has barely mentioned the gun issue since his election.

There are a few lessons:

1. The law is not the only or the best way to enact social change. We have reduced smoking through education and public policy campaigns without outlawing cigarettes, though we have restricted where they can be used.

2. People will often ignore an option or a right until they fear losing it. The cost of a public perception of losing the right to own a firearm undid any potential intended result of reducing firearm ownership.

3. There is a difference between making a political statement and achieving a desirable political result. Such laws as the Brady Bill touted the aims of moral supremacists who wanted fewer guns in American society. Some believe that independent citizens should not be trusted with such power; some just want a reduction in gun violence. While the Brady Bill made a strong political statement it did not achieve the result of reducing gun ownership or have a material impact on gun violence. In fact it dramatically increased gun ownership.

Gun ownership symbolizes a uniquely American relationship with their government. It says that our government does not fear an armed citizenship because they can be removed from office with a very non violent vote. Even such controversial close elections as the Bush Gore decision was resolved peacefully. The power of private gun ownership is more about the sanctity and power of the vote than about the importance of being able to freely own a snub-nosed .38 or a Glock with a laser sight.

Other than perceived pending legal threats to gun ownership the only other motivation to own a gun (other than collectors’ value) is safety. It is a commonly accepted myth that a gun is more likely to be used against the owner than in his defense. Privately held guns stop more crime than the police, most often without ever being fired. Several different researchers have documented this. (Gary Kleck, John Lott, Lee Nisbet)

Making the streets safer will reduce gun ownership far more than restricting the clip capacity of a new pistol. Guns crimes should carry stiff penalties. It seems odd that many of the moral supremacists who object to gun ownership the most are the most lenient towards violent criminals.