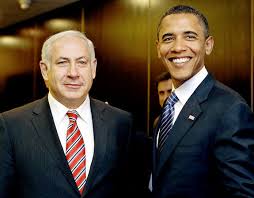 Netanyahu speech is commented on in American Thinker by Leo Rennert
June 15, 2009
Netanyahu Lays Down His Markers

That said, Netanyahu also took sharp issue with Obama on several fronts, starting with his rejection of the president’s view that Jewish settlements in the West Bank are the key obstacle to forging a regional peace. “Whoever thinks that the enmity to Israel is the result of our occupying Judea and Samaria is confusing cause and effect,” Netanyahu declared “The root of the conflict is the refusal to accept the Jewish people’s right to exist in its historic homeland.” To drive home this point, Netanyahu cited Arab attacks against Israel before 1967 when Arabs controlled the West Banka and Gaza, and, more recently, the first and second intifadas and the counter-productive Israeli evacuations of all settlements from Gaza — “Every retreat by us was met with thousands of suicide bombings and rockets.”

Most tellingly, Netanyahu drew a sharp contrast between Obama’s view of the right of Israel to its own homeland and his own view of Israel’s ancient, historic right to sovereignty in the Holy Land. In his Cairo speech, Obama described the creation of Israel as an outgrowth of the Holocaust — “The aspiration for a Jewish homeland is rooted in tragic history that cannot be denied. Around the world, the Jews were persecuted for centuries, and anti-Semitism in Europe culminated in an unprecedented Holocaust.” Not so, said Netanyahu, Israel is not a post-Holocaust implant into the Middle East (the kind of view also espoused by Ahmadinejad) — “Judea and Samaria are not a foreign country for us,” said Bibi. “This is the land of our forefathers, Abraham, Isaac and Jacob. The right of the Jewish people over our country does not come from the suffering we have been through. Some say that if it weren’t for the Holocaust there would be no State of Israel. But I say that if Israel had been established in time there would not have been a Holocaust.”

“The biggest threat to Israel and the Middle East and all of humanity is the meeting between radical Islamism and nuclear weaponry.”

for the whole article read here.